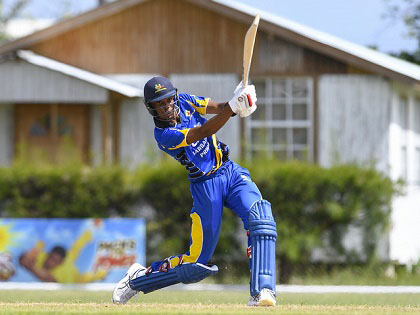 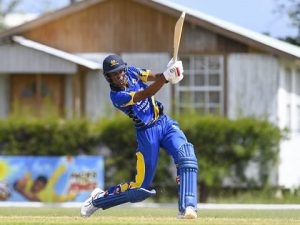 Captain Kraigg Brathwaite finally struck form with a patient hundred as title-holders Barbados Pride made light work of Kent Spitfires to surge into the final of the Regional Super50 here late Wednesday night.

Opting for first knock in the opening day/night semi-final at Coolidge Cricket Ground, Pride emerged from a slow start to rally to 263 for three off their 50 overs.

They were anchored by Brathwaite’s unbeaten 105 from 136 deliveries, but propelled by an aggressive 81 off 73 balls from the fluent Roston Chase.

In reply, Kent were forced to navigate a series of rain interruptions, leaving them with a revised target of 230 off 43 overs. However, that proved a mountain to climb and they ended on 216 for eight and with a 13-run defeat under Duckworth/Lewis.

Leg-spinner Hayden Walsh Jr (2-45) and left-arm seamer Dominic Drakes (2-49) made key strikes, while Brathwaite produced a stingy 10-over spell which cost just 37 runs and kept the English county in check.

Without a half-century in his previous eight innings in the tournament, the right-handed Brathwaite chose the ideal time to find his touch, stroking eight fours and two sixes in a typically measured knock.

His first fifty required 84 deliveries, but he quickened the pace to reach three figures off a further 47 balls, to record his third List A hundred.

In one of his rare moments of all-out aggression, he lofted seamer Ivan Thomas over midwicket for his second six to move into the 90s in the 45th over before he completed his hundred with a single square in the 48th over off fast bowler Grant Stewart.

More importantly, however, Brathwaite put on 93 for the first wicket with Phillips who hit 10 fours — an array of cuts and off-side drives — in an entertaining 70-ball knock.

He was moving into high gear when he missed a sweep at a straight one from off-spinner Adam Riley and perished lbw in the 22nd over.

Left-hander Jonathan Carter (4) lasted 21 balls before lazily clipping left-arm spinner Imran Qayyum to Dickson at short midwicket — four balls after he had been dropped by Stewart at midwicket.

On 119 for two in the 29th, Chase arrived to provide the innings with momentum, belting nine fours and two sixes, in his fourth half-century of the tournament.

He combined with Brathwaite in a 144-run, third -wicket stand that allowed Pride to dominate the latter part of the innings and gather 94 runs from the last 10 overs.

Rain repeatedly disrupted the Kent reply, but even so, the English county lacked the intent required to keep up with the required run rate.

Daniel Bell-Drummond provided the early fireworks with 23 off 27 balls, but when he nibbled at one angled across him from Drakes and was caught at the wicket, Kent were stuttering on 62 for three in the 14th over.

Dickson, however, found an ally in Rouse and together they put on 64 for the fourth wicket, a partnership which revived their side’s hopes.

The right-handed Dickson faced 73 balls and counted four fours, while Rouse, also right-handed, struck a lone boundary in a 69-ball stay at the crease.

Walsh broke the stand in the 29th over when he got Dickson to sky a heave, and ran around to mid-on to take the return catch. He struck again four overs later, removing Captain Will Gidman for eight, lbw missing a sweep at 143 for five in the 33rd over.

In a last-ditch effort, Haggett put on 27 for the sixth wicket with Rouse and 35 for the seventh with Stewart (18 not out). But Rouse was bowled by off-spinner Chase, cutting at one too close to him in the 38th over, and by the time Haggett holed out in the deep in the penultimate over, victory was already beyond Kent.