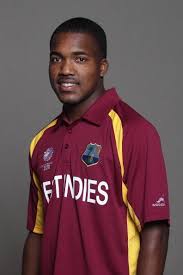 Darren Bravo’s childhood dream was to play 100 Test matches. So far, the stylish left-handed batsman who returned to the West Indies Test team in the series against England after a hiatus of two years has featured in 52 Tests for the West Indies so far.

And he says that it is his intention to be as consistent as possible each time he goes to crease in his quest to reach this goal and firmly establish a place in the team.

“I think it is the dream of any young player to represent the West Indies, and even though I have played over 50 Test matches, I still dream about stepping out on the field and playing for the West Indies. It is always good to wear West Indies’ colours,” he added.

Bravo who is a member of the West Indies camp that has been training for the past three days for the One-Day International Tri-nation Series against Ireland and Bangladesh next month, said the session under the guidance of interim head coach Floyd Reifer had been great so far.

“It has been hard work, fitness-wise and otherwise. The coach outlines what he wants from us, we are trying to come up with the brand of cricket we want to play moving forward. The guys have been working on their technique as much as possible. Ramnaresh Sarwan has joined us as a mentor to help us with our batting and he has been doing a tremendous job so far. I had a couple of sessions with him that went really well. I hope he will go to Ireland with us, because I believe that with a young batting team like we are someone of Sarwan’s stature will mean a lot to us,” Bravo said.

Bravo, who has played 102 ODIs, said while he was looking forward to the tri-nation series in Ireland and noted it was going to be tough.

“The conditions will be foreign to us, I hope when the team get there we adjust as quickly as possible. I think that with the quality of our team we will do well in the series,” he stated.

He described the recent ODI series against England as a fantastic one for the regional team and lauded the leadership of captain Jason Holder and the batting of veteran opener Chris Gayle.

“I think it was a fantastic series for us as a team. We were led brilliantly by Jason (Holder) and Chris (Gayle) set the tone at the top of the order which gave us the motivation to go out there and perform against the best ODI team in the world. It was a very good series and I am happy that it was very competitive and it should give us confidence going forward into the World Cup,” Bravo said.

He acknowledged that most of the teams in the World Cup were quality teams but pointed out that no one gave the West Indies a chance in the ODI matches against England and yet the series was drawn.

“We are capable of winning the World Cup, but the team must concentrate on the plans we have made as a unit which will be the most important thing. We are not going to focus very much on the opposition. We have certain plans and roles we have to execute. Once we get them right I believe the results will take care of themselves. No one gave us a chance against England and we went out there and prove that we can beat the best team in the world. We just got to continue to believe in ourselves and anything is possible,” Bravo said.

Barbuda Council Asks For Report On Use Of Hurricane Funds