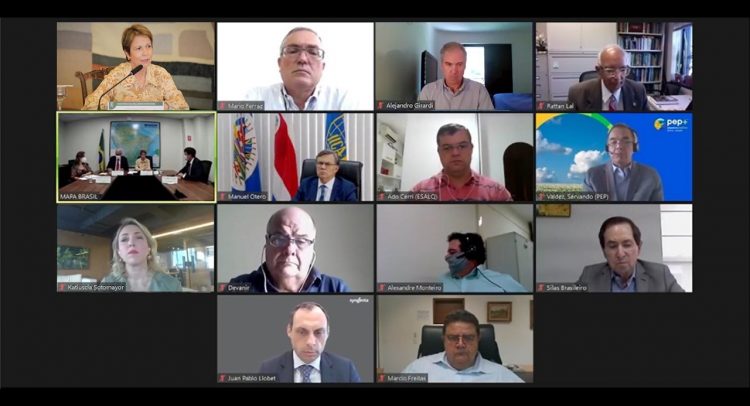 Brazil launches the Living Soils of the Americas program, the restoration initiative promoted by IICA and renowned scientist Rattan Lal

Brasilia, 25 November 2021 (IICA). The “Living Soils of the Americas” program promoted by the Inter-American Institute for Cooperation on Agriculture (IICA) and award-winning scientist and director of the Center for Carbon Management and Sequestration (C-MASC) at The Ohio State University, Rattan Lal, was officially launched in Brazil at an event attended by Tereza Cristina, Minister of Agriculture of the South American country.

The initiative seeks to contribute to the health of Brazilian soils, foster good land management practices and drive incentives to transform agricultural systems into ecosystems that accumulate more carbon in soils, thereby increasing the quality of a natural resource that plays a crucial role in guaranteeing sustainable food production.

The Minister of Agriculture, Livestock and Supply (MAPA) of Brazil was joined at the event by Fernando Camargo, Secretary of Innovation, Rural Development and Irrigation of MAPA; Rattan Lal, 2020 World Food Prize winner and IICA Goodwill Ambassador; and Manuel Otero, Director General of IICA.

“Living Soils of the Americas” is a program that seeks to serve as a bridge between science and public policies aimed at restoring and protecting soils in the Americas, whose degradation threatens the capacity of Latin America and the Caribbean (LAC) to guarantee global food security.

The initiative is designed to increase rural well-being, productivity and food security while respecting environmental limits and making rational use of natural resources.

“Brazil’s agriculture is based on science and, to this end, we must forge and foster partnerships that facilitate work with the private and academic sectors, international agencies, civil society and other entities. These partnerships for the conservation of soil, one of the most important resources we have, are key to accelerate efforts for the benefit of agricultural life”, remarked Minister Tereza Cristina.

The head of MAPA noted that Brazil has been a pioneer in “zero-emission agricultural and livestock development”.

In this regard, she outlined the Brazilian Plan for Low-Carbon Agricultural Production (ABC Plus), which was launched in 2010 and will continue until 2030. The plan includes ambitious goals such as rehabilitating 15 million hectares of degraded pastures and expanding the zero-tillage area from 25 million to 33 million hectares. It also seeks to reduce greenhouse gas emissions by 160 million tons of carbon dioxide equivalent annually.

“We have worked with different research centers, demonstrating that Brazilian producers can develop production models that do not involve carbon pollution. In 200 thousand hectares, ABC Plus has integrated those systems with technologies, which has contributed to implementing sustainable agriculture in Brazil. However, that is not enough; there is still room for improvement”, she noted.

“We want to achieve healthy soils, increase the productivity of well-established farmers, and avoid dedicating more areas to the production sector”, added Tereza Cristina, who also highlighted a national program for the conservation of watersheds, water and soils that Brazil has implemented, which could be complemented by the “Living Soils of the Americas” initiative.

“The goal is for soils to become carbon sinks, which we must harness to mitigate climate change. Reducing emissions while increasing productivity is the goal in order to better manage agriculture. GHG emissions represent 42% of the region’s overall emissions, while the global average of the land use sector is only 18 percent. Therefore, putting carbon back in the land-based sink is very important”, explained Lal.

The leading global authority on soil science added that, although soil conservation practices in the region have been changing, there are still substantial differences between countries. Therefore, it is crucial to employ the agricultural practices that were highlighted at the Food Systems Summit organized by the United Nations in September.

“Managing and restoring soils, recarbonizing soils and vegetation, improving water quality and availability, adapting practices to reduce negative emissions, reducing the use of chemicals, using organic alternatives where possible, promoting the bio-circular economy, supporting the One Health concept, capitalizing on digital innovations such as precision agriculture, and rewarding farmers for their work in agriculture while promoting education at the elementary school level is crucial”, he noted.

Lal also highlighted the ABC Plus program implemented by Brazil, which he described as a leading nation due to its successful management of this issue. “Between 2010 and 2020, the ABC program restored 15 million hectares of pastures, integrated crop and livestock on 4 million hectares, increased biological nitrogen fixation on almost 5 and a half million hectares, reduced deforestation and used green manure to fertilize 4 million hectares. Additionally, the government provided credit to farmers in the amount of almost USD 1 billion and sequestered 170 million tons of carbon”, he explained.

For his part, the Director General of IICA reiterated the organization’s commitment to promoting soil conservation in LAC, “where approximately 40% of soils are degraded to some degree”, in order to transform this reality and translate it into rural well-being and climate change mitigation.

“The Living Soils program will contribute to generating this impact, and we stand ready to assist through IICA’s network and structure, in order to put knowledge into practice and recover soils – a unique asset on which we plant our crops”, remarked Manuel Otero.

Juan Pablo Llobet of Syngenta stated that the company is proud “to form part of this initiative, which is aligned with the company’s objectives”. He noted that, together with IICA, they have been working “on training programs for LAC, to further expand the work of the Living Soils of the Americas initiative and C-MASC”.

“As leaders in the agriculture sector, we must face the challenge of climate change and take advantage of our potential to reverse the issue of soil degradation, protect the environment and improve production”, he stated.

Along the same lines, Alejandro Girardi of Bayer Crop Science highlighted the relevance of “participating, since the beginning, in this process, developed with key participation from IICA and under the leadership of Dr. Lal”.

“This opportunity is strongly aligned with an idea that we champion: health for all and hunger for no one. The agriculture sector has a very important role to play in this regard. Innovation, transformation and sustainability are key pillars. Our goal is to help producers to reduce the environmental impact on carbon coverage by 30% and to reach 100 million small-scale farmers who have proven their resilience. In this regard, soil is key”, he concluded.

In turn, Servando Valdez of Pepsico stated that “we are excited about and committed to what we can achieve in a tangible way, with support from our farmers, to contribute to soil health in Brazil and all of Latin America”.