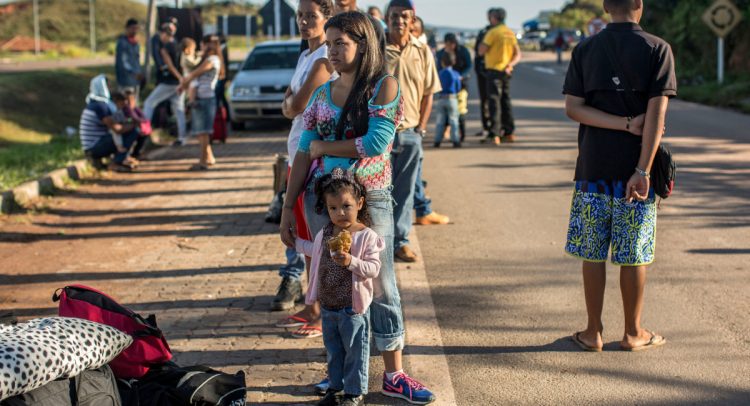 Brazilian President Michel Temer has announced he may place limits on the number of Venezuelan migrants allowed to enter the country via its northernmost state each day from its crisis-ridden Latin American neighbour.

Speaking to local media on Wednesday, Temer said capping the number of migrants crossing into Roraima state could be necessary as local authorities in the area were being overwhelmed by the estimated 700 to 800 people currently arriving from Venezuela every day.

One option being considered is limiting the number of people entering each day to between 100 and 200, Temer said.

On Tuesday, Temer signed a decree to re-establish “law and order” in Roraima which will result in more troops being deployed to the border with Venezuela and grant armed forces policing powers within certain areas and along highways in the state. The decree is in effect until September 12.

About 70,000 Venezuelans have crossed the border into Brazil during the past year, according to government estimates, fleeing an economic collapse which has resulted in chronic shortages of basic supplies and rampant hyperinflation.

Thousands have settled in Roraima, where tensions between migrants and Brazilian nationals have become heightened in recent weeks.

Clashes between local residents and Venezuelans in the border town of Pacairama on August 18 forced several migrants to retreat back over the border into Venezuela.

The violence occurred fewer than two weeks after Brazil briefly closed its northern border to Venezuela following requests from local authorities, who have called for extra support from the federal government.

In February, Brazil declared a state of emergency in Roraima that led to a funding boost for the state and doubled the number of troops stationed at the border with Venezuela.

“The more and more Venezuelans try to cross the different borders into other parts of Latin America to escape the economic crisis at home, the more governments are beginning to put restrictions on them,” Newman said.

Amnesty International’s America Director Erika Guevara-Rosas, meanwhile, called on Temer to “protect the rights of both its citizens and refugees” in a post on Twitter.

“Refugees are not a security threat. Militarising the response to address challenges in receiving communities will only increase xenophobic attitudes. Brazil’s state has international responsibilities to protect the rights of both its citizens and refugees,” Guevara-Rosas said on Wednesday.

On Tuesday, immigration officials from Peru, Colombia and Brazil met in the Colombian capital, Bogota, to discuss strategies for coping with an influx of Venezuelan refugees.

Peru and Ecuador have in recent weeks begun denying entry to migrants travelling without valid passports, affecting hundreds of thousands of Venezuelans who were previously allowed to cross into both countries using only paper ID cards.

An estimated 1.6 million Venezuelans have fled the country since 2015, about 90 percent of whom went to other countries within the region, according to the UN’s Refugee Agency.

Last week, the UN’s International Organization for Migration (IOM) warned the crisis was “building towards a crisis moment”.

'Harry Potter' is worth how much?! Startling stats on the 20th anniversary