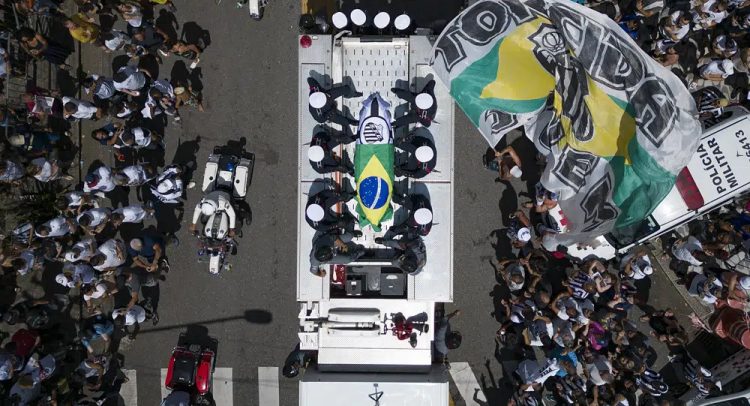 SAO PAULO (AP) — Brazilian soccer stars past and present are under fire from fans for skipping Pelé’s funeral and opting to pay their respects on social media.

The three-time World Cup champion was buried in his hometown Tuesday after more than 230,000 mourners passed by his casket at Vila Belmiro stadium in Santos. Pelé died last Thursday after a battle with cancer.

Their social media accounts were flooded with comments by angry fans after Pelé’s burial.

None of the players from Brazil’s 2002 World Cup winning squad attended. One of them — former star midfielder Kaká — was criticized because he had complained during an interview in December that Brazilians do not honor their sports heroes as much as foreigners.

“You didn’t even show up for the funeral of the man who paved the way for you to have the life that you have,” said Joao Vitor Custodio on Kaká’s Instagram post about Pelé that drew more than 5,000 comments, including many about his decision not to come for the tributes.

In Neymar’s Instagram post mourning Pelé’s death, one fan wrote: “It is easy to say, but you sent your father and did not come.” The Brazi striker later limited comments in that post to people he knows.

No foreign footballers came to Brazil for Pelé’s tributes, funeral and burial.

Former midfielder Mauro Silva was the lone representative of the 1994 team that won the World Cup in the United States. He is currently an executive at the São Paulo state soccer federation.

Some of Pelé’s surviving Brazil teammates from the 1958, 1962 and 1970 World Cup titles were unfit to attend, like 91-year-old Mário Zagallo, and others like Roberto Rivellino were reportedly too upset.

Fans didn’t seem to believe those who said they tried but could not get to Santos in time, like Cafu.

“Unfortunately and with a lot of sorrow I could not attend Pelé’s funeral, I was on the other side of the globe and at work. My flights to return to Brazil started only in the early hours of Wednesday, I can only get to Brazil tomorrow,” he said. “Does that change what I feel for Pelé, or what he represents to me and to soccer in general? Never!”

Rivaldo, who lives in the United States, took a similar path.

“Even if I were in Brazil I am not sure I would have attended the funeral,” Rivaldo said. “I don’t like to pay tributes at that time, I am not against those who do. I met Pelé, I was with him many times and I had the opportunity to honor him during his life.”

Among the distinguished former Brazilian players who did come for the tributes were Bayern Munich’s Zé Roberto, Manchester City’s Elano and Roma’s Paulo Roberto Falcao. Those three have a connection with Santos.

Except for Santos, few active players and executives of Brazilian clubs attended the funeral. All top flight clubs are in pre-season.

To add to the shock of many fans, Flamengo chose to introduce its new coach Vitor Pereira at the same time as the nationally televised procession of Pelé’s casket through the city of Santos before the burial.

Local soccer executives did not suspend play of the Copa São Paulo de Futebol Júnior, a tournament for youngsters that attracts a lot of media attention in the South American nation.

The funeral of two-time World Cup winner Mané Garrincha at the Maracana Stadium in Rio de Janeiro in 1983 was also poorly attended by Brazilian footballers.

Pelé repeatedly said he was too shaken to attend any funeral of family or friends. He was buried in the same cemetery of his father Dondinho and his brother Jair Arantes do Nascimento. The Brazilian soccer great did not attend their funerals either.

The casket of late Brazilian soccer great Pele is draped in the Brazilian and Santos FC soccer club flags as his remains are transported from Vila Belmiro stadium, where he laid in state, to the cemetery during his funeral procession in Santos, Brazil, Tuesday, Jan. 3, 2023. (AP Photo/Matias Delacroix)