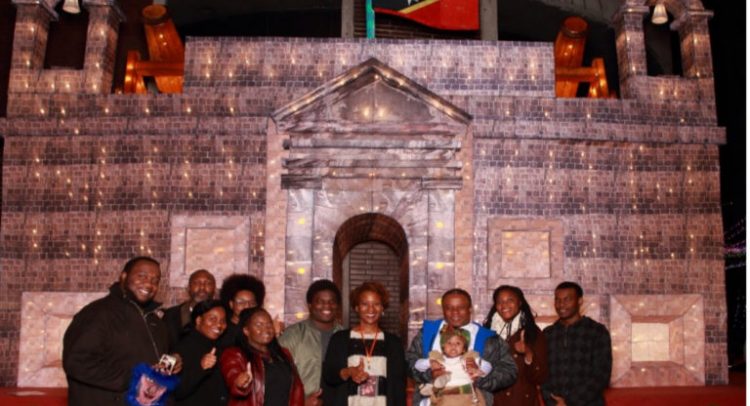 The Taipei City Lantern Festival, a cultural event which is hosted for the second year as part of the Chinese Lunar New Year activities, has kicked off on February 24 2018 with much ceremony and the prospect of welcoming over 6 million visitors to this nightly extravagant spectacle.

This year, however there is a significant difference, since for the first time one of the diplomatic allies, the tiny Federation of St. Kitts and Nevis would be a participant in the Festival. The offer to participate was accepted by H.E. Ambassador Jasmine Huggins and with the support of the Taiwan Ministry of Foreign Affairs a concept was made a reality.

At a press conference to promote the event, Ambassador Huggins, alongside Taipei City Deputy Mayor Jia-ji Deng, stated that the Embassy seized the opportunity to promote the Federation and its tourist attractions to the more than 6 million citizens who will be visiting the Festival over the 9-day event. With its cannons sitting atop the structure and soaring 400 cm above the street level, the replica is almost as
imposing in Taipei as it is in Saint Kitts. “This is an excellent platform for tourism promotion and it also provides the opportunity for the citizens of Taiwan to learn more about one of its diplomatic allies.” the
Ambassador said. The exposure which the Federation would receive is immeasurable, as apart from the number of visitors who would view the lantern physically, the television and print media coverage is extensive throughout Taiwan. The depiction of Brimstone Hill Fortress has already captured the attention of visitors with many pausing to take photos with the masquerade and clown cut outs at the Saint Kitts
and Nevis booth adjacent to the lantern, and to ask questions about the iconic structure. Ambassador Huggins and some of the students in Taiwan also took part in the official opening and lighting ceremony
alongside the Taipei City Mayor Wen-che Ko and other officials of the Taipei City Government.

In expressing appreciation to the company that made the lantern, Quan Cai Ceative Studio, Ambassador Huggins also commended the organizers for the successful staging of the event and expressed sincere
gratitude to the Ministry of Foreign Affairs of Taiwan and the Taipei City government for the opportunity to be a part of something so worthwhile and inclusive in the life of the nation.