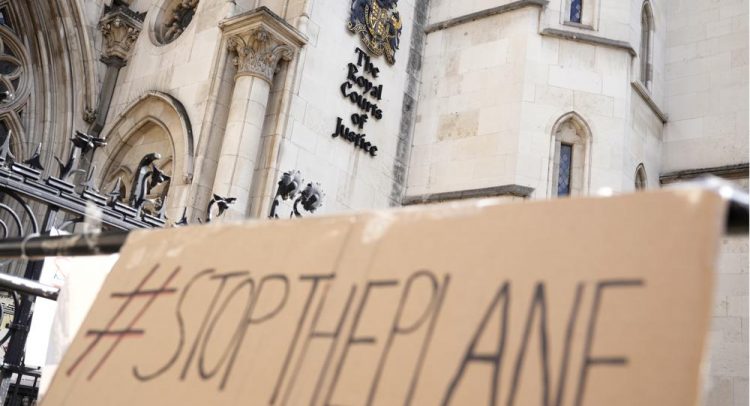 LONDON (AP) — The British government vowed Wednesday to organize more flights to deport asylum-seekers from around the world to Rwanda, after a last-minute court judgment grounded the first plane due to take off under the contentious policy.

Home Secretary Priti Patel said ”preparation for the next flight begins now” despite legal rulings that none of the migrants earmarked for deportation could be sent to the East African country.

“We will not be put off by the inevitable legal last-minute challenges,” Patel told lawmakers.

Under a deal signed in April, Britain plans to send some migrants from countries including Iraq, Afghanistan and Syria who arrive illegally in Britain as stowaways or in small boats to Rwanda, where their asylum claims will be processed. If successful, they will stay in the African country, rather than returning to Britain.

Prime Minister Boris Johnson’s government says the plan is a legitimate way to protect lives and thwart the criminal gangs that send migrants on risky journeys from France across the English Channel.

Human rights groups argue that the plan rides roughshod over the protections afforded to refugees under rules set up after World War II. They have called the idea inhumane and a waste of money. Britain paid Rwanda 120 million pounds ($150 million) up front for the deal.

Critics include leaders of the Church of England and, according to British news reports, heir to the throne Prince Charles.

British courts refused last week to ground the first flight, scheduled for Tuesday, but the number due to be aboard was whittled down by appeals and legal challenges, from 37 last week to seven on Tuesday.

Then the European Court of Human Rights, an international tribunal supported by 46 countries, including Britain, ruled late Tuesday that an Iraqi man due to be on the plane shouldn’t fly, saying he faced “a real risk of irreversible harm.” That judgment allowed the final few migrants on the plane to win a reprieve from British judges with minutes to spare, and the government canceled the then-empty flight.

British Cabinet minister Therese Coffey said the government was “surprised and disappointed” by the ruling.

“I think the public will be surprised at European judges overruling British judges,” she told Sky News — though the European judges did not overrule British courts, which had ruled on the issue of the flight as a whole, not on individual migrants.

Some lawmakers from the governing Conservative Party nonetheless say Britain should withdraw from the Strasbourg-based European human rights court, which Britain helped to set up.

A full trial of the legality of the Rwanda plan is due to be heard in the British courts by the end of July.

Human rights lawyer Frances Swaine, who represents one of the people due to be sent to Rwanda, urged the government to wait for that decision before organizing any more deportation flights.

“I would be sitting back and thinking: Was it worth it, either from a financial or a legal perspective, to organize one of these very expensive flights again when they’ve been so unsuccessful this time around on legal grounds?” she said.

The British government says it welcomes refugees who come by approved immigration routes but wants to put the criminal smuggling gangs that operate dangerous cross-Channel voyages out of business.

Migration and refugee groups point out that there are no approved legal routes to Britain for most refugees, with the exception of those fleeing Afghanistan and Ukraine. Britain receives fewer asylum applications than comparably sized European countries such as France and Germany.

There are also concerns about the migrants’ treatment in Rwanda, the most densely populated country in Africa. While Rwanda was the site of a genocide that killed hundreds of thousands of people in 1994, the country has built a reputation for stability and economic progress since then, the British government argues.

Critics say that stability comes at the cost of political repression.

More than 28,000 migrants entered Britain last year by crossing the English Channel, up from 8,500 in 2020. About 10,000 have arrived so far this year. Dozens have died while attempting the trip, including 27 people in November when a boat capsized.

Johnson, fighting for his political life amid concerns about his leadership and ethics, has promised to stop the criminal gangs behind the perilous journeys — a “tough on immigration” message that plays well with the Conservative grassroots.

“This isn’t a long-term plan; it is a short-term stunt,” she said.

Migration groups say the Rwanda plan is unlikely to deter desperate people making risky journeys to Britain. More than 440 people were brought ashore in southern England from small boats on Tuesday, including a heavily pregnant woman and parents with children.

Nando Sigona, a migration expert at the University of Birmingham, said that because most of the people chosen for deportation under the Rwanda plan are single men, the policy could lead to more women, children and families attempting to cross the Channel.

FILE – A placard left outside the High Court where the ruling on Rwanda deportation flights is taking place, in London Monday, June 13, 2022. British Foreign Secretary Liz Truss says the first deportation flight to Rwanda will take off in the evening, Tuesday, June 14, 2022, regardless of how many people are on board, as immigration attorneys launch case-by-case appeals on behalf of the migrants scheduled for removal. The comments comes a day after two British courts refused to block the deportation flights, rejecting last-ditch appeals filed by immigration rights advocates and labor unions. (AP Photo/Alastair Grant, File)