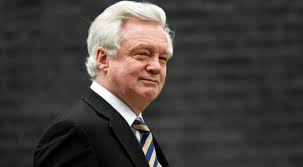 Britain’s Brexit minister David Davis has resigned two days after the Cabinet approved a plan to retain strong alignment with the European Union even after leaving the bloc, British media reported on Sunday.
The resignation will be a blow to Prime Minister Theresa May, who is trying to win over Brexit hardliners in her own Conservative Party ahead of a fresh round of negotiations with Brussels this month.
A long-time eurosceptic, Davis was appointed two years ago to head up the newly-created Department for Exiting the European Union after Britain voted to leave the European Union in a historic referendum.
He became the face of Brexit, leading the British delegation in talks with Brussels, although his role was overshadowed in recent months as May and her aides took an increasingly key role in the negotiations.
The 69-year-old had reportedly threatened to quit several times over a perceived lack of firmness in Britain’s negotiating stance but had remained strictly loyal to the prime minister in public.
The resignation comes just hours before May was due in parliament to explain her plan for Britain to adopt EU rules on goods after Brexit, amid anger from MPs in her own party who want a cleaner break.
Conservative MP Peter Bone said Davis had “done the right thing”, adding: “The PM’s proposals for a Brexit in name only are not acceptable.”
Labour Party chairman Ian Lavery said: “This is absolute chaos and Theresa May has no authority left.”
May’s plan would create a free trade area with the EU for goods, to protect supply chains in areas such as manufacturing, while maintaining flexibility for Britain’s dominant service sector.
It is unclear whether Brussels will accept this, after repeatedly warning Britain it cannot “cherry-pick” bits of its single market.
Foreign Secretary Boris Johnson, a leading Brexit supporter, was widely reported to have described the plan as a “turd” before agreeing to support it.
Davis, a sharp operator and a gut-instinct politician, was a “Leave” campaigner in the referendum on Britain’s EU membership.
He was well acquainted with the Brussels beat: he was Europe minister between 1994 and 1997 as the European issue tore apart then Conservative prime minister John Major’s government.
Born to a single mother and brought up on a public housing estate in London, Davis went on to study molecular and computer sciences at Warwick University in central England.
From there, he took a higher degree in business at the London Business School, attending the advanced management programme at elite US university Harvard while pursuing a career on the board of sugar giant Tate and Lyle.
Davis also served as a reservist in the Special Air Service, the British army’s elite special force unit.
Noted for his love of climbing and flying, his ascent in politics began in 1987 when he was elected to parliament, representing a seat in northern England.
He became a government whip ensuring party discipline and later, as Major’s Europe minister, delighted in the nickname “Monsieur Non”.
Davis then chaired the powerful public accounts committee in the lower House of Commons from 1997 to 2001.
He ran for the Conservative leadership in 2001 and came fourth, but was made party chairman.
Davis was the front-runner in the 2005 Conservative Party leadership contest, but lost out to David Cameron, shedding momentum after a party conference speech fell flat.
He stayed on as the party’s home affairs spokesman, but dramatically resigned his seat to force a by-election in protest at the Labour government’s erosion of civil liberties.
He won the seat back but the move cost him his place in Cameron’s top team.
When the Conservatives returned to power in 2010, he never got a government post and spent his time on the backbenches campaigning on civil liberties issues.
When Cameron resigned after defeat in the Brexit referendum, Davis was appointed back in government by May, Cameron’s replacement.