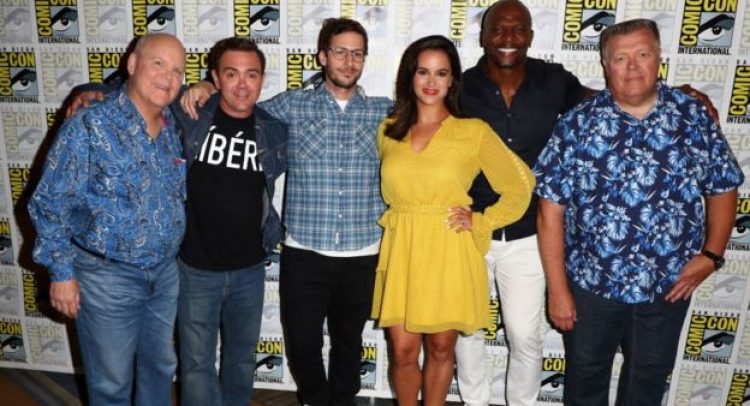 Brooklyn Nine-Nine star Terry Crews has said four new episodes of the police comedy were thrown “in the trash” in the wake of the death of George Floyd.

Crews said the show would “start over” in light of the anti-racism protests.

He said: “We’ve had a lot of sombre talks about it and deep conversations and we hope through this we’re going to make something that will be truly groundbreaking this year.

“We have an opportunity and we plan to use it in the best way possible.”

Co-creator Dan Goor had four episodes “all ready to go” before Mr Floyd’s death a month ago prompted widespread Black Lives Matter protests as well as soul-searching in society in the US and beyond, Crews said.

“They just threw them in the trash,” he told Access Hollywood. “We have to start over. Right now we don’t know which direction it’s going to go in.”

Brooklyn Nine-Nine follows the exploits of a team of detectives in the fictional 99th Precinct of the New York City Police Department. In 2014 it won two Golden Globe Awards, including best TV comedy series.

Crews did not give details of the content of the four scrapped episodes.

The actor and America’s Got Talent presenter also recounted his own dealings with the police, saying police officers had pointed guns at him, mistakenly, before he became a well-known face.

“It’s something that every black man has been through and it’s hard to really try to get other people to understand,” he said.

The 51-year-old said the momentum for change made it “Black America’s Me Too movement”.

“We always knew this was happening, but now white people are understanding,” he said.

Earlier this month, Goor and the cast made a $100,000 (£79,000) donation to the National Bail Fund Network to support “the many people who are protesting police brutality”.

The letter, published by Variety, was written by Insecure actor Kendrick Sampson, who was hit with police batons and shot with rubber bullets during the recent protests.

“The way that Hollywood and mainstream media have contributed to the criminalisation of black people, the misrepresentation of the legal system, and the glorification of police corruption and violence has had dire consequences on Black lives,” it read.

It also demanded greater opportunities for black creatives off-camera and in senior management roles, as well as guaranteeing that marketing budgets were no longer slashed due to “myths of limited international sales and lack of universality of Black-led stories”.

The letter noted how “distribution and marketing processes are often marred, filtered, and manipulated by the white gaze”.

The open call comes in the same week that, in the UK, the BBC committed to investing £100m of its TV budget over a three year period to produce “diverse and inclusive content”.

Terry said the worldwide movement is a chance for deep and meaningful change.

“This is an opportunity right now for us all to unite and get together and understand what this is and that we have to battle this together,” he said.

Main photo: Crews (second right) with the rest of the cast of Brooklyn Nine-Nine (Getty Images)

Approval of Trump's coronavirus response sinks to lowest on record amid surge in cases: Reuters/Ipsos poll