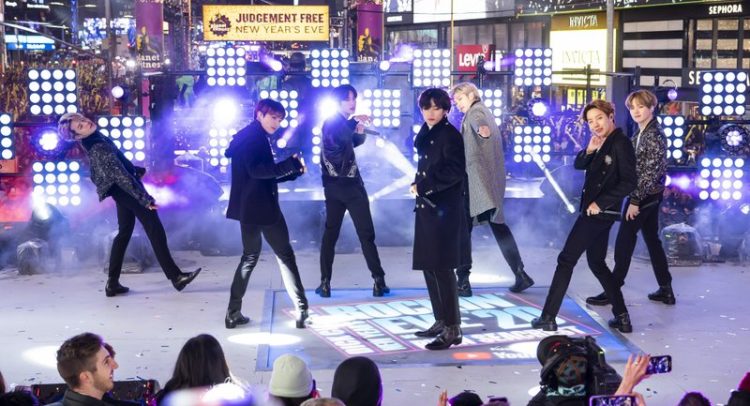 SEOUL (AP) — K-pop band BTS has earned its first Grammy nomination, a long-awaited feat for the South Korean act that has been reshaping the global pop landscape with record-breaking songs and well-mobilized fans.

“K-pop, represented by BTS, has cracked the mainstream of mainstream, the Grammys,” said Kim Youngdae, a Seoul-based music critic and author of the book “BTS: The Review.” He called the nomination “historic” and said the band “has carved out its own space and squeezed itself in.”

The pandemic may have unexpectedly contributed to the long-awaited recognition from the Recording Academy.

“Before (the pandemic), artists who went to the U.S. would sing at radio stations, concerts and live stages, but these include a variety of limitations, including time and space,” said Kim Do Heon, editor-in-chief of the online music magazine IZM. Kim said the band’s increased online presence during the pandemic — through frequent social media interactions and paid virtual concerts — may have contributed to its global success, leading to the nomination.

The band — composed of J-Hope, RM, Suga, Jungkook, V, Jin and Jimin — will compete for best pop duo/group performance at the 63rd Grammy Awards with their all-English song “Dynamite,” which topped the Billboard Hot 100 chart this year.

This year’s best pop duo/group performance, a highly competitive category, features artists such as Taylor Swift with Bon Iver and Lady Gaga with Ariana Grande. The awards don’t have a K-pop category and recently changed the name of the best world music album category to best global music album to be more “modern and inclusive.” The academy said the new name “symbolizes a departure from the connotations of colonialism, folk and ‘non-American’ that the former term embodied.”

After the announcement, BTS uploaded videos on their official Twitter page, which has over 30.9 million followers, showing four members reacting to the nomination by jumping up from a couch and shouting “Yes!” and “BTS!”

The band’s members have always expressed their hope for a Grammy nomination. “I’d cry if we get an award in a (group-related) category,” J-Hope said at news conference for their new album “BE” last week.

The most popular boy band in the world has been a familiar presence at the Grammy Awards — but as an award presenter and performer, hitting the stage for less than a minute with Lil Nas X and others at the previous awards ceremony.

However, a nomination by the Recording Academy evaded the band for years as it broke multiple records, including becoming the first Korean act to top the Billboard Hot 100 chart and clenching multiple trophies at ceremonies including the MTV Video Music Awards and American Music Awards since their humble debut in 2013.

Their dedicated fans around the world — known as ARMY — have been pushing for a Grammy nomination for years.

“It’s like when you’re doing a test and you want to know if you passed or not and you finally get the result saying you passed, and make it that, but like 20 times more impactful,” Divisha Deepti, a university student in Fiji, said in a video interview.

Maryann Lockington, another ARMY fan who works as a communications officer, said many of her fellow fans stayed up late for the announcement, and their fan group chat “blew up” afterward.

Main Photo: Members of BTS perform at the Times Square New Year’s Eve celebration in New York on Dec. 31, 2019. The K-pop band is nominated for a Grammy Award for best pop duo/group performance with “Dynamite,” their first song to hit the No. 1 spot on the Billboard Hot 100 chart. (Photo by Ben Hider/Invision/AP, File)