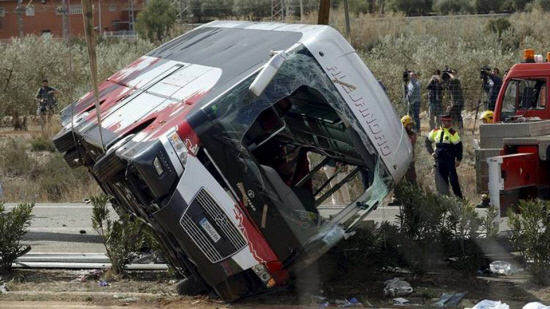 At least 24 people were killed and another 19 injured when a bus careened into another vehicle at high speed and overturned on a highway near Ecuador’s capital Tuesday, officials reported.

The Colombian-registered bus was traveling to Quito when it hit a smaller vehicle in an area known as dead man’s curve at about 3 a.m., Ecuadorean authorities said.

Col. Wilson Pavon, head of Ecuador’s transit police, said the majority of the passengers aboard were Colombians, but that Venezuelans were also among the dead. Two minors traveling in the smaller vehicle were also killed.

A small fleet of ambulances and first responders rushed to the crash site about two hours from Quito before dawn. They found the severely wrecked bus overturned and several homes adjacent to the highway damaged and strewn with metal debris.

It’s the second highway tragedy in less than three days in Ecuador.

On Sunday, 12 people were killed and another 30 injured when a bus carrying fans of the Ecuadorean soccer team Barcelona SC overturned on a highway after a game. Late Monday, relatives of the victims bid farewell to their loved ones at a collective wake held at Barcelona’s stadium in Guayaquil.

Police were still investigating the causes of the earlier crash, but some eyewitnesses told local media that the bus carrying members of the Sur Oscura fan club that accompanies Barcelona to all its away games was seen trying to overtake other vehicles shortly before the crash.

Lira crisis: Turkey to boycott US electronic goods over sanctions