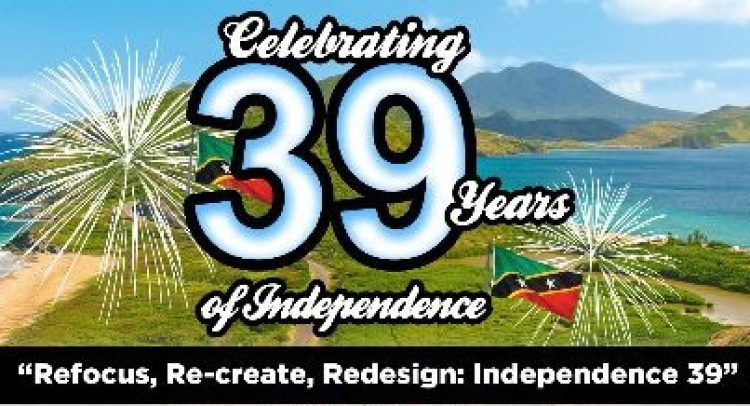 The official final Calendar of Events for the 39th Anniversary of Independence of St. Kitts and Nevis was officially released on Thursday, September 08, 2022, with a wide range of activities.

The 39th Anniversary of Independence is being celebrated under the theme “Refocus, Re-create, Redesign: Independence 39”. Activities will spread throughout September and run into October 2022. The first event on the Calendar is the start of the National Colours Week, which kicks off on Friday, September 09 with the colour green. Additionally, Cabinet Members are slated to visit primary schools located in the east and west zones. The Basseterre Zone will be done on Tuesday, September 13, while Wednesday, September 14 is slated for high schools.

A number of grand events are included on the Calendar as is the tradition. National Heroes Day, which is celebrated on September 16 every year, is a commemorative event where the National Heroes of St. Kitts and Nevis are honoured for their pioneering spirit and enormous contribution to nation-building. This year, there will be two National Heroes Day Observances – one at the National Heroes Park at 8:00 a.m. and the other at R.L. Bradshaw Memorial Park in St. Pauls at 4:00 p.m.

Activities including the usual patriotic programmes in schools which is slated for September 15, as well as a night of elocution on October 07 cater to young persons.

This year, residents are encouraged to showcase their patriotism by using the four designated patriotic colour days. September 09 is set aside for green; September 12th for yellow; the 13th of September for black; the 14th for white, while red should be worn on September 15th.

Additionally, there will be two competitions: SKN Independence Hair In SKN Challenge and the National Pride Competition Pride-Full, which will be carried out on social media between the 12th -19th of September. There will also be an Independence Walk and Wacky Patriotic Colours on Saturday, 10th September.