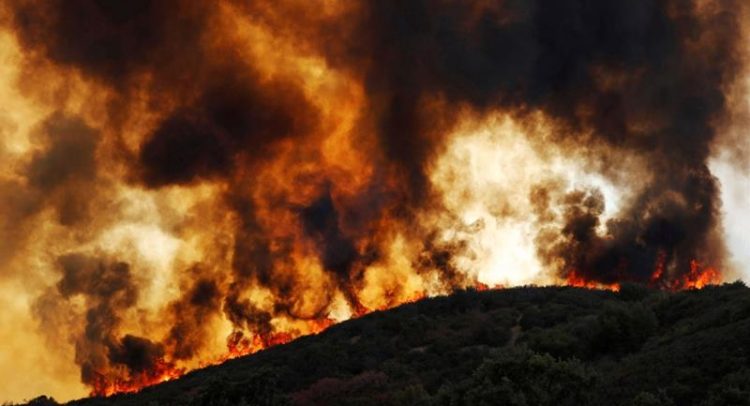 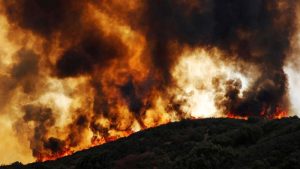 Out-of-control wildfires in California have become the largest in the US state’s history with weeks to go until the end of the scorching summer season.

The fire, which originally consisted of two separate fires that merged as they grew, has burned 114,800 hectares (about 1,150-square kilometres) of land so far – the size of Los Angeles.

The so-called Mendocino Complex has now surpassed the Thomas Fire, which burned 114,100 hectares in Santa Barbara and Ventura counties in 2017, as the largest wildfires in California history.

It is raging about 130km north of San Francisco, at the southern tip of the Mendocino National Forest.

It is one of two major wildfires in California, the other one being the Carr fire, about 260km north of state capital Sacramento.

More than 15 major blazes are currently burning, according to the California Department of Forestry and Fire.

“Over 10,000 structures are threatened by these fires and 2,000 fires have been destroyed.”

The fires have been significantly more destructive than last year, with 3,981 blazes reported so far burning 254,700 hectares in total.

More than 14,000 firefighters are trying to contain the different blazes, using helicopters, airplanes and other equipment. They include 2,000 volunteer prison inmates, according to the California Department of Corrections. US President Donald Trump declared the fires a “major disaster” in California and ordered federal funding to be made available to help recovery efforts.

On Twitter, Trump has repeatedly sent out posts about the California wildfires over the last couple of days.

The president, offering no proof of his claims, said the blazes “were made worse by the bad environmental laws which aren’t allowing massive amounts of readily available water to be properly utilised”.

Wildfires this year have come particularly early in the summer season, a result of hotter weather drying out large areas of land.

So far, at least seven people have been killed, including a firefighter, bulldozer operator, and a grandmother with her two grandchildren, and two others.

In the whole of the United States, more than two million hectares have been destroyed by wildfires.

Another in the bag for King Dis N' Dat