Fans are accusing the promoter of the show, Mr. Michael “JB” Walters, of “ripping them off”, and are demanding a refund of their money.

It was advertised as the biggest calypso competition in the Caribbean and the promoter actually re-named the show this year as the “Calypso World Cup”; giving an indication as to how global he was hoping to take the event, in coming years.

But the show never got started. The band never played a note, though they appeared to be struggling to sound check in the partial darkness. The audience never saw the calypsonians, because they were refusing, it is alleged, to leave their hotel unless they were paid their initial “appearance fees” of $500”. This though had nothing to do with the prize money for the actual winners of the competition who were expected to receive as much as $10,000; $5,000 and $3,000, for the King, First Runner and Second Runner-up respectively.

The audience began arriving for the competition, as early as 8:00pm; but up to 9:30pm the show still had not started. The promoter was not at the venue. It was he who was, at the time, back at the hotel trying to complete financial and other arrangements to have the participating calypsonians travel to the site of the contest.

The long wait and impatience of the audience soon turned to anger, frustration and suspicion. It got worse when a popular calypso MC blurted out to the crowd, suggesting that the show was not going to take place and patrons should consider making an approach for a refund. No one appeared on stage to explain what the extended delay was all about and what was happening. Then suddenly the members of the house band, Grand Masters, were advised to secure their equipment. Then someone shouted, pouf, “Lights Gone”. It was later learnt that the supplier of the required power, via generator, complained that up to that time he still had not received his payment for the rental of the generator and he was therefore disconnecting his supply. A few minutes after there was some hope when the lights returned but this soon disappeared, as it was only to take the stage out of darkness to allow the band to properly dismantle their equipment.

That was enough and the crowd eventually headed to the gates and the ticket booth, in hot pursuit of whosoever was responsible and demanding that they receive an immediate refund. But after over an hour of standing in line, arguing, protesting, and issuing threats of legal and “other” actions, police tried to calm the tempers.

Recognizing that the matter was escalating, and understanding that there was need for someone to say something to the crowd, the senior police officer on duty, thought it best to address the angry fans. He tried his best to assure them that they intended to make contact with the promoter, so that they may discuss the possibilities of issuing the refunds. However, as the crowd demanded that they wanted their money now, the officer suggested that completing the refunds at that time may have been a challenge. This only angered the fans more. Some fans said that they had just bought their tickets and entered the venue. Others said they paid the higher price of $60, compared to those who paid $50 for the advanced purchases. But there was no way to distinguish the two categories of buyers.

Suddenly the promoter appeared, shouting in a rather angry fashion, “What are you doing outside? I did not cancel the show. The show is not cancelled; the calypsonians are here, we are having the show.” However, the band was long gone and most of the judges were not present. It was impossible to regroup and pull off the contest at that stage. And worse, the fans were “locked” out. 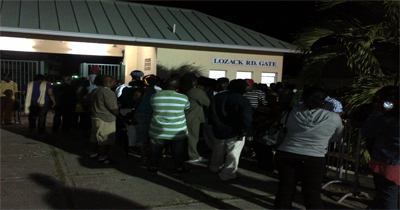 By that time the police had wisely secured the gates on Lozack Road; keeping the fans on the outside. Had this not been done, as a precautionary measure, the security challenges would have been of major proportions and the consequences, especially for the promoter, would have been very severe. It was not so much that the crowd of approximately 150 persons was violent, but their momentary anger and feeling of being cheated, could have caused people who are ordinarily peaceful and law abiding, to operate outside of their calmed character and nature. They were livid and felt hurt, as any calypso enthusiast would. These were the true calypso fans that turned out to support what they thought would have been a great competition, featuring 10 of the best calypsonians from across the Caribbean. St. Kitts was being represented by Rudder, in the absence of King Konris, who said he was not available. Culturama King, Dis N’ Dat, was on hand to represent his Queen City, Nevis.

Thirty minutes after, the promoter was “invited” to accompany the police to the nearby headquarters on Cayon Street. A large section of the crowd followed. They demanded to enter the station to make a formal report but the police elected not to allow anyone in; again, out of precaution because inside was the promoter, and the crowd (of about sixty persons) was not yet in a forgiving mood. They repeated their demands to be refunded. 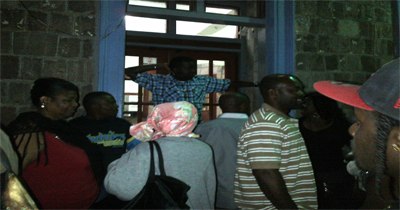 The police was very understanding and cooperative with the public. They allowed them to remain immediately in front of the station, while others assembled on the other side of the road. The officer posted at the front of the door indicated that he was under instructions not to allow anyone inside but that a senior officer would be available to address them. But the crowd was defiant and actually remained, though in smaller numbers, until 2:10am Saturday.

Due to the intervention of the Assistant Commissioner of Police, Mr. Ian Queeley, who eventually made an appearance to assist the efforts of his officers, approximately 20 fans were able to secure a refund of $50 each. ACP Queeley facilitated the transfer of funds after speaking with the promoter, still being held on the inside. All names of those present were taken. A police constable took the tickets from each fan, still present, and re-emerged from the station with the reimbursements. By this time though, the crowd had been asked to relocate from immediately in front of the station, to the police car park on the other side.

It was only after this that the crowd finally dispersed. What will happen to the other patrons, who are still to be refunded, is not known at this time. As one police officer remarked, “not even we have been paid for our security services”.

This was the second year of the competition, which was first introduced in 2012 when it was won by Karene Asche of Trinidad & Tobago. The results of that show are listed, in order, below.

What will happen to the competition is also an uncertainty. Some patrons have suggested that the idea of the contest is a great one, but they fear that not only the image of the promoter has been tarnished, but so too the good name of St. Kitts and Nevis. Calypsonians down the region may become apprehensive about re-entering in future years… if there are future years.

US unemployment rate holds steady in December at 7.8%