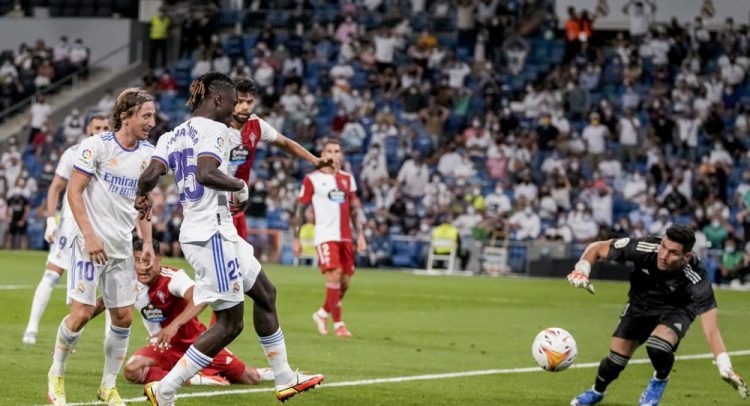 Camavinga quick to make a good impression with Real Madrid

It had taken even less than that for him to awe the Madrid fans at the Santiago Bernabéu Stadium with a neat move with the ball around a defender.

It hasn’t taken long for the 18-year-old Camavinga to make a good impression with Madrid.

Little by little he is making his case to become a regular starter in Carlo Ancelotti’s team, which on Saturday hosts Villarreal to defend its Spanish league lead.

“He’s got everything you need to play for Real Madrid,” Ancelotti said. “He’s very young and is under no pressure at the moment because that’s what his personality is like. He has the freshness that comes with youth.”

Camavinga was Madrid’s only signing at the transfer window’s deadline last month, arriving amid the disappointment of the club’s failed attempt to bring in his France teammate Kylian Mbappé from Paris Saint-Germain. Camavinga joined from Rennes on a six-year contract.

The dynamic youngster came off the bench in the 66th minute of the team’s 5-2 win over Celta Vigo in the Spanish league on Sept. 12, finding the net a few moments later and impressing with his aggressive play in the midfield.

He also came off the bench in Madrid’s next match, setting up Rodrygo’s 89th-minute winner at Inter Milan in the Champions League with a nice pass inside the area.

Camavinga played off the bench again in the team’s 2-1 win over Valencia in the Spanish league, and was a starter in the 6-1 rout against Mallorca on Wednesday.

The club’s goal has been to gradually add him to the squad but he has shown he doesn’t need a lot of time to adjust. Camavinga’s versatility has given him an edge in a midfield filled with veterans like Toni Kroos, Luka Modric and Casemiro. His main competitor early on appears to be Fede Valverde, another young player at age 23.

“Camavinga’s position on the pitch is something that I’ve discussed with him,” Ancelotti said. “He has always played as a holding midfielder but he’s got quality. He’s very quick on the ball. He’s a complete midfielder.”

Ancelotti said the club is in a good spot with its midfield.

“The future of Real Madrid will be secure with these players,” the coach said. “And it is secure now as well with Modric, Kroos and Casemiro. The midfield is very strong in all aspects.”

Madrid will take on a Villarreal team that is coming off its first win of the season after six consecutive draws in all competitions. Unai Emery’s team defeated Elche 4-1 on Wednesday to end its winless streak.

Madrid holds a two-point lead over defending champion Atlético Madrid, which visits last-place Alavés earlier Saturday. Alavés is one of the two teams yet to earn points this season, along with Getafe.

Seventh-place Barcelona, still in crisis after three consecutive matches without a win in all competitions, hosts winless Levante on Sunday. Coach Ronaldo Koeman is under added pressure and remains at odds with club president Joan Laporta. The Dutch coach will not be on the bench against Levante after receiving a two-match suspension for complaining with the fourth official at the end of the team’s 0-0 draw at Cádiz on Thursday. He will also miss the league match at Atlético next weekend.

Fifth-place Valencia, coming off two straight losses, hosts Athletic Bilbao, while fourth-place Sevilla tries to follow its win over Valencia in a home game against Espanyol.

Third-place Real Sociedad hosts Elche, while sixth-place Rayo Vallecano, off to a good start back in the first division, hosts Cádiz.

Second-to-last-place Getafe visits eighth-place Real Betis, while on Monday Celta Vigo hosts winless Granada in a match between clubs near the bottom of the standings.