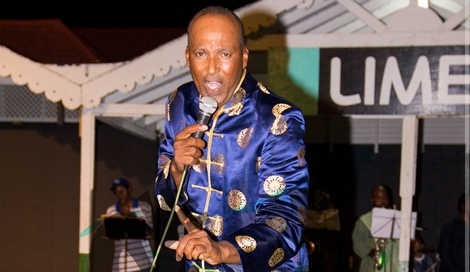 Basseterre, St. Kitts, Friday 2nd, August, 2019, (MyVueNews.com) – This Saturday it will be the clash of the super heavy weights of calypso in Nevis. This is one of the premier events on the annual calendar of the Culturama celebrations that run from July to August.
The man to beat will be the reigning Monarch, King Dis N Dat.

As the Chairman of the Calypso Sub-Committee, Warren Moving, recently stated, “Calypso is still the defining feature of Culturama in Nevis. There is no Culturama without calypso. It is all encompassing, all encapsulating, pulling together the elements of drama, music, and storytelling and of course the competitive spirit and everything else that is associated with competition.”

As strange as it may seem, no calypsonian in the history of Culturama in Nevis, has ever successfully defended his crown on Final Night of the Senior Monarch Competition.
But this year, now that the 8 finalists are known, people are already speculating about the chances of Keith “Dis N Dat” Scarborough walking into the annals of history, by becoming the first person to win the crown for a second consecutive year.

While the many times crowned king may have his mind set on changing the misfortunes of many greats like himself, who all failed in their bid to repeat, others will be working hard to rob him of a history-making performance.

Chief amongst them will be two former kings-Hollywood and Astro. But the other finalists, in Nutsy, Black Hat, Sookie, Murray and Irwin, will equally try their best to keep the ambitions of Dis N Dat far away from the coronation chair.
One thing that is clear though, is that it is shaping up to be a keenly contested competition that will be staged on Saturday, 3rd August, from 8:00pm at the Cultural Complex in Charlestown.

At a recent ceremony, the competitors were able to select their performance times on stage and as a result here is the Order of Appearance-
1. Astro
2. Irwin
3. Dis N Dat
4. Murray
5. King Hollywood
6. Sookie
7. Black Hat and
8. Nutsy

Chairman Moving explained that hosting a competition like the senior calypso show is a very expensive undertaking, both for the committee and the calypsonians.