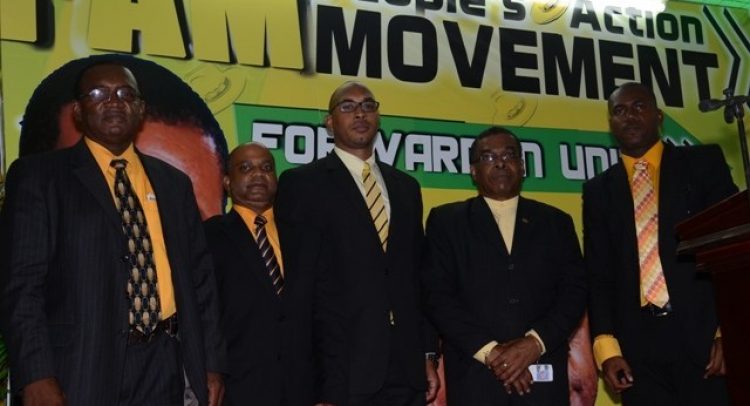 By The People’s Action Movement (PAM),

As the people of St. Kitts & Nevis, ready themselves to return to the polls to elect their new Representatives to the National Assembly, the Peoples Action Movement, (PAM), is convinced that the continued prosperity of our nation will again require a united government that embraces the aspirations of citizens of all persuasions.

Therefore, in order to protect and expand on the achievements of the past five years, it is critical that the Peoples Action Movement sharpen its campaign focus, to enable its candidates, and those of its sister parties, to avail themselves of the best chances of success, on Election Day.

For this reason, we have slightly modified our campaign approach, so that we are better positioned to retain all four constituencies that we secured in 2015, while at the same time strategically targeting others that our data indicate as potential victories.

When the elections are over, we are confident that the number of seats we gained in 2015, will be increased in 2020, making PAM, once again, the largest single block of Representatives in the National Assembly.

We are excited that Shawn Richards, Lindsay Grant, Eugene Hamilton and Ian Patches Liburd will be retained as Members of Parliament. But in addition, and based on our latest data, PAM is also poised to secure victory in Central Basseterre for our Party Chairman, Ambassador Jonel Powell.

In our new focus therefore, our National Executive has approved the candidacy of five (5) representatives who will contest in Constituencies, 1,2,4,5,& 8. Equally we have endorsed, the candidacy of one delegate from our sister organization, the Peoples Labour Party, (PLP), to represent our coalition, in Constituency Number Six (6), for this election.

We recognize that any election is best won through careful organization, planning and execution of strategies. But we are also aware that victory is more likely, when we wisely utilize the limited resources at our disposal.

Now that the date for the election has been announced, we encourage all citizens to conduct themselves within the confines of the law and to respect all regulations and restrictions that have been put in place to fight COVID-19.

The Peoples Action Movement continues to embrace and live up to the spirit of its founding motto, “Putting People First.”