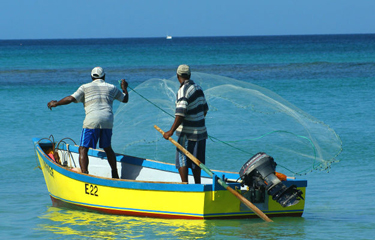 A new research report from the Food and Agriculture Organization of the United Nations (FAO) cautions that climate change is expected to significantly reduce fisheries globally by 2050, including in the Caribbean. The report also advises countries to build a more sustainable and resilient sector through climate adaptation and mitigation strategies that can protect marine species, as well as strengthen fisheries production, food security, revenues, and fisheries governance.

Titled Impacts of Climate Change on Fisheries and Aquaculture: Synthesis of Current Knowledge, Adaptation, and Mitigation Options, the 654-page report is the world’s most comprehensive publication on climate change and fisheries to date.

The report features a 22-page chapter on marine fisheries in the Western Central Atlantic Ocean, which includes the Caribbean region, Gulf of Mexico and Northern Brazil. The chapter, entitled Climate Change Impacts, Vulnerabilities and Adaptations: Western Central Atlantic Marine Fisheries, was co-authored by Dr Hazel Oxenford, Professor of Fisheries and Marine Ecology at the University of the West Indies (Cave Hill), and Dr Iris Monnereau of the Food and Agriculture Organization of the United Nations (FAO). Dr Monnereau is the Regional Project Coordinator of the Climate Change Adaptation of the Eastern Caribbean Fisheries Sector (CC4FISH) Project, which is funded by the Global Environment Facility (GEF) and executed by the FAO.

Drs Oxenford and Monnereau argue that the fisheries sector of the Caribbean’s Small Island Developing States (SIDS) is one of the most vulnerable to climate change in the world. The authors provide a thorough analysis of climate change impacts on the Caribbean fisheries sector – warmer sea temperatures, rising sea levels, coral bleaching, sargassum influxes and more frequent high-intensity storms and hurricanes are already disrupting fishing operations and infrastructure, fish landings, fisher livelihoods and coastal communities. The authors warn that if countries do not increase their efforts to build climate resilience at multiple stakeholder levels, including among local and regional fisherfolk and fisherfolk organizations, the disruptions will worsen as climate change progresses over the next three decades.

The chapter emphasizes potential socio-economic impacts on the sector, including a decline in food security and nutrition and an increase in poverty among people who rely on the fisheries sector for their livelihoods. Some of the expected negative outcomes of the climate change on fisheries include a drop in fish populations; food safety risks; negative economic impacts; possible strains in fisheries-related international agreements; and the increased likelihood of conflict.

“The fact there will be few winners in this sector as a result of climate change emphasizes the importance of mainstreaming climate change into fisheries management planning at multiple levels. Our work also highlights the knowledge gaps in species-level responses and socio-economic impacts in this region, particularly within the Caribbean, in the context of climate change and justifies the need for increased attention to this kind of research,” says Dr Oxenford.

“While several countries have already been engaging in some adaptation measures, for example in the development of mobile apps for improving early warning and safety at sea, a lot still remains to be done. The FAO, under the CC4FISH project, is supporting countries in the region in assessing the vulnerability to climate change of coastal fishing communities. The project delivers capacity-building opportunities such as business skills training to improve record keeping to facilitate access to loans and insurance, safety-at-sea training, and the development of additional livelihoods, including aquaponics and seamoss farming. CC4FISH also seeks to mainstream climate change in policy-making and legislation, as well as improve hurricane preparedness of the fisheries sector,” explains Dr Monnereau.

At the national level, adaptation activities within the framework of the international climate change regime (the United Nations Framework Convention on Climate Change (UNFCCC) and the Paris Agreement) are set out in countries’ five-year Nationally Determined Contributions (NDCs). The authors found that within the Western Central Atlantic, a total of 24 independent nations have submitted NDCs of which 14 (mostly the Caribbean SIDS) specifically mention the fisheries sector primarily highlighting its vulnerability to climate change. Only two of these countries make specific reference to fisheries in terms of mitigation strategies, although ten countries list some aspect of fisheries within their stated adaptation plans. The authors describe adaptation measures that countries are already carrying out and make recommendations for including fisheries in their national climate adaptation and mitigation plans, thus enhancing the sustainability of the sector. Using the information from this chapter and incorporating the fisheries sector into the NDCs is of great importance to the region and can support increased resilience of the fisheries sector to climate change.