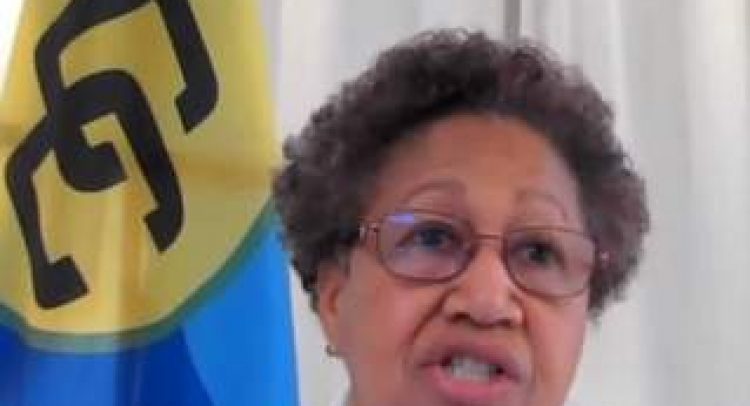 With global anxieties mounting over the ballooning Russia-Ukraine crisis, Caribbean Community (Caricom) Secretary General Dr Carla Barnett said on Monday that the issue is not on the agenda of the 33rd inter-sessional meeting of heads of government, which gets under way today in San Pedro, Ambergris Caye, Belize.

However, Jamaica’s Minister of Foreign Affairs and Foreign Trade Senator Kamina Johnson Smith had said at a press conference on the weekend that the region’s approach to the development would be discussed when heads meet over the two days, and that national concerns would be addressed by the Cabinet. She was responding to questions concerning whether Jamaica had been contemplating sanctions against Russian interests on the local front.

On Monday during a virtual press conference Dr Barnett pointed journalists to statements previously issued by Caricom on Russian hostilities against Ukraine.

“The community has already issued two different statements — before the invasion calling for calm, and the other one after the invasion to ask for a return to diplomacy as a means of settling disputes. Those considerations go deep to the core of what Caricom stands for — the principles of territorial integrity, of self-determination, of the use of diplomacy and international relations to settle, rather than going to war. I would expect that to continue to be the case,” she said.

Dr Barnett noted that, in addition to the statements, individual member states have issued similar calls for Russia to back away, “not only because of the wrongness of it, but because of the impact, not only on the Ukraine, but the international community and on the economy as well”.

She said the Russia-Ukraine matter may arise, but stressed, “It is not an issue that is currently on the agenda, but it is a matter that the community has been discussing and has been making pronouncements on.”

Meanwhile, the secretary general said the most critical issue on the agenda is the advancement of a protocol which will allow groups of member countries that agree on particular aspects of the Caribbean Single Market and Economy (CSME) to move ahead, allowing the remaining countries to join when they can.

She pointed out that this is the most progress that has been made on the CSME so far, and would dispense with the long-standing idea that “we all have to agree to every single step before we make a single step”.

Barnett said this is one of the things that has hamstrung forward movement in the community.

“There is a growing feeling that if there can be like mind among a set of countries, and they want to move forward on a particular aspect of the single market and economy, they ought to be able to move forward together,” Dr Barnett.

She argued that integration processes are expected to have hiccups, which is why mechanisms are established to settle disputes.

“The reason we have a structure for raising issues that may be counter to the treaty is because we expect, as we roll out the integration process, that there will be a need for dispute settlements [and] judgements to be made if someone is violating any of the fundamental principles,” she stated.

Preventable cancers on the rise in Barbados