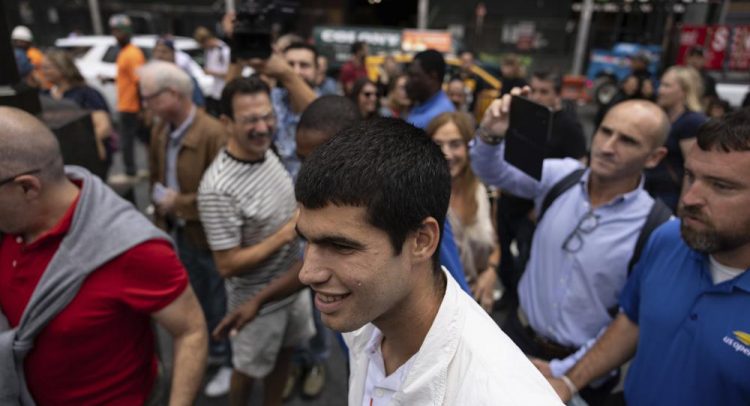 NEW YORK (AP) — Carlos Alcaraz got out of bed Monday as a U.S. Open champion, as the No. 1-ranked player in men’s tennis at age 19 — and, truth be told, exhausted.

“I woke up dead,” the Spaniard said through that already-familiar wide smile during an interview with The Associated Press that followed a Times Square photo shoot with his fingerprint-smudged first Grand Slam trophy.

“So many tough days in a row. High intensity. High level,” said Alcaraz, the first man in 30 years to win five-setters in the fourth round, quarterfinals and semifinals and still come away with the title at Flushing Meadows. “I don’t know how I played so many tough and long matches.”

By the end of that run, which included saving a match point during his 5-hour, 15-minute quarterfinal victory over Jannik Sinner, then a 4-hour, 19-minute semifinal victory over Frances Tiafoe, before Sunday’s 6-4, 2-6, 7-6 (1), 6-3 victory over Casper Ruud, Alcaraz was spent.

Not that he was about to let anyone know.

“You have to show the opponents you are good, you are fine. But you’re dealing with problems all the time. You have to know that — and you have to overcome that. You have to be fine with that,” Alcaraz said, sitting in a stuffed chair on the top floor of a Manhattan hotel, skyscrapers jutting beyond the windows. “After the quarterfinals against Jannik, I woke up the next day and I almost couldn’t walk. But you have to give everything you have inside. All the hard work you put in every day is for that.”

That hard work is what transformed a body his coach, 2003 French Open champion and U.S. Open finalist Juan Carlos Ferrero, likened to “spaghetti; very thin” when he teamed up with a 15-year-old Alcaraz.

“No muscles at all. Not in the back, not in the legs,” Ferrero said. “But obviously we saw something very special.”

So, too, does the rest of the world.

His youth certainly contributes to the fascination with Alcaraz as the sport looks for a fresh face after decades of dominance by Rafael Nadal, Novak Djokovic and Roger Federer, who each has at least 20 Grand Slam titles.

Asked what he considers his best quality, Alcaraz paused to ponder, then chuckled sheepishly.

“I’m a dynamic player. I can do anything on court,” he said. “The opponent can’t read my shots. In some moments, I can try (unique) shots. I can do a lot of shots.”

Like the behind-the-back one against Sinner, say. Or the sprinting-away-from-the-net, twisting flick of a forehand he pulled off more than once against Tiafoe. Or the landing-on-his-belly-on-the-run forehand that just barely missed against Ruud.

“I’ve always been like that. I never give up. I just believe I can win every point,” Alcaraz said. “If the point seems lost, I still believe I have a chance to get the ball, to keep the point alive. So I run. And I consider myself fast.”

“It makes us other players feel like you need to paint the lines, sort of, to be able to hit a winner. Sometimes even that’s not enough,” said Ruud, a 23-year-old from Norway who is now ranked No. 2 after two runner-up finishes at the past three Slams.

“He’s very fast. He’s very quick. He’s a great mover,” Ruud said. “He can get to balls that we’ve probably never seen before.”

There tends to be an obsession in all sports with finding a past athlete with whom to compare a budding star. So some will note that Alcaraz’s attacking, all-court game is closer to Federer’s than Nadal’s.

But it’s not time for comparisons. Not yet, anyway.

Carlos Alcaraz wants to be the best version of Carlos Alcaraz, not anyone else. And that makes perfect sense.

“Every player is different. Every player has their style. And some players will look like other players in the game. But I’ve never wanted to seem like another player, like Federer or Rafa or anyone,” he said. “I’m just who I am. This is my game.”