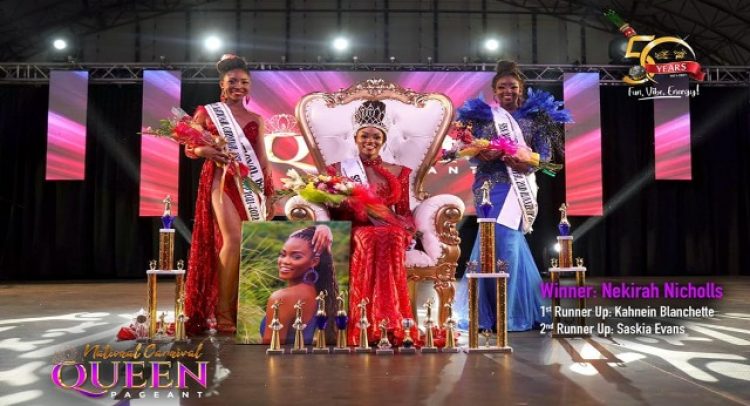 Carnival Prize-giving set for this weekend

The formal closure of St. Kitts & Nevis’ carnival will be staged this weekend when the official prize-giving ceremony is hosted at the St. Kitts Marriott Resort in Frigate Bay.

Winners of the various pageants and competitions will be presented with their cash and other prizes, by top officials of the National Carnival Committee.

These will include the Carnival Queen Nekirah Nicholls and her Runners-up; the Senior Calypso Monarch-King Astro and his First and Second Runners-up.

The top winners for the Groovy and Power Soca Monarch Competitions are also amongst the lineup of awardees.

Panorama Champions-EBJ Harmonics will for a second year, receive the top prize for the annual contest.

The Carnival Committee has advised that other winners and participants will receive their prizes ahead of the ceremony, which takes place on Saturday, 26th February.

The event will also feature short remarks from the Minister of Culture and Carnival, Jonel Powell and the Chair of the Carnival Committee, Shannon Hawley.

Guest performances will be delivered by King Astro, T-Bone, who placed First Runner-up in the Power Soca contest, JTS-Entertainment, who won the inaugural Carnival Song Competition, and EBJ Harmonics-2020 and 2021 Panorama Champs.

The event will be hosted by former 4-times crowned Junior Calypso King and many times finalists in the Senior Competition-Clement “Monarch” O’Garro and radio personality-Tawanna Wigley. The house DJ will be the very popular radio personality-Sista Sensia.

The ceremony will be streamed live on the social media platforms of the carnival committee, (YouTube and Facebook).

Brantley to be Guest Speaker for PAM's Convention