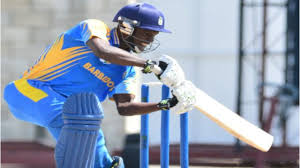 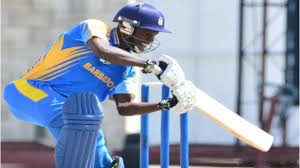 Asked to chase an uncomplicated 228 at 3Ws Oval, Pride overcame a stuttering start to reach their target in the 47th over, and follow up their convincing win over Trinidad and Tobago Red Force on Tuesday’s opening day.

Left-hander Jonathan Carter, adjudged Man-of-the-Match, was at the forefront of the run chase, stroking a classy unbeaten 92 while Chase was also in fine nick with an unbeaten 87.

The pair put on 168 in an unbroken fourth wicket stand which pulled Pride around for the discomfort of 63 for three in the 16th over.

Sent in earlier, Hampshire rallied from 29 for three in the 14th over to reach 227 for seven off their 50 overs, with Zimbabwean Sean Ervine top-scoring with 63, Joe Weatherley getting 51 and Lewis McManus, 47.

Hampshire had a less than ideal start, losing Calvin Dickinson (9), Thomas Alsop (12) and James Adams (3) cheaply inside the first 15 overs.

However, Ervine and Weatherley combined in a 112-run, fourth wicket parntership to prop up the innings and push the visitors towards a competitive total.

Ervine struck five fours and a pair of sixes in a positive 68-ball knock while Weatherly faced 78 balls and belted two sixes.

Pride clawed their way back into the contest when they removed both in successive overs. Ervine pushed a return catch back to off-spinner Chase while Weatherley cut veteran left-arm spinner Sulieman Benn to Chase at point.

Tottering again on 147 for five at the end of the 37th, Hampshire were revived by McManus and Bradley Taylor (20) who put on a valuable 48 for the sixth wicket.

McManus struck three fours and sixes in an entertaining 42-ball innings before becoming one of two wickets to fall to Cummins in successive overs late on.

Pride then suffered an early setback in their run chase when Kevin Stoute nicked a catch behind off seamer Bradley Wheal, to fall for two with five on the board in the second over.

Captain Kraigg Brathwaite added 33 with Shai Hope (34) but failed for the second straight innings, bowled middle stump by former West Indies speedster Fidel Edwards for 12 in the 10th over.

And for the second successive innings, Hope got a start but failed to carry on and was caught at cover in the 16th over, driving left-arm seamer Christopher Wood.

However, Carter arrived to put any linger doubts about the result to rest, dominating the Hampshire attack in an innings which required 113 balls and contained seven fours.

Playing with quiet assurance, the out-of-favour Windies limited overs batsman brought up his half-century off 67 balls with three fours in the 30th over, but ran out of time with three figures beckoning.

Chase, meanwhile, was no less authoritative, counting seven fours and two sixes in a 93-ball innings.

Pride will chase their third straight win when they take on Windward Islands Volcanoes in their third match at Kensington Oval on Saturday.