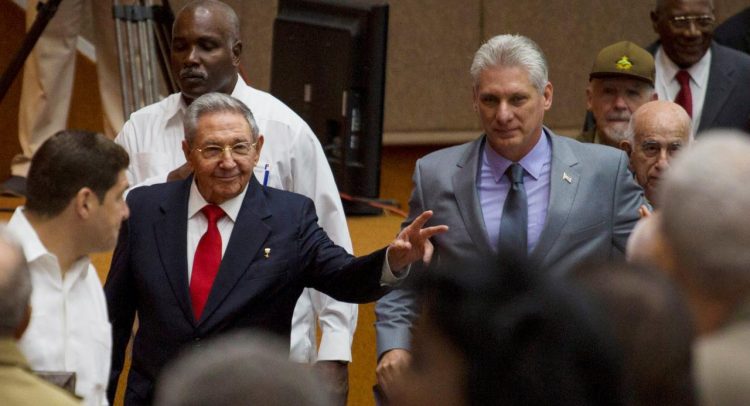 Cuba’s Raul Castro moved closer to retiring as president on Wednesday as the country’s parliament proposed Miguel Diaz-Canel to replace him, in a shift that will usher in the island’s first non-Castro leader since the 1959 revolution.

Castro, 86, is stepping down after 10 years in office but his departure – which he had announced several years ago – is seen as unlikely to herald major changes in Cuba, at least for a while.

The National Assembly was due to vote later in the day on the proposal to replace him with Diaz-Canel, a 57-year-old Communist Party stalwart who is currently first vice president.

Diaz-Canel, born after the revolution, is an engineer by training who embraces technology and appears socially liberal. After years climbing the ranks of the Communist Party, he is considered a safe bet to inherit the ideological mantle of Castro and other elderly leaders who helped Fidel Castro oust U.S.-backed dictator Fulgencio Batista.

The new president is likely to be cautious at first, seeking to consolidate support among conservatives in the party despite desire among young Cubans for faster development. He is unlikely to challenge one-party rule.

The rubber-stamp assembly was due to vote on 30 members of Cuba’s state council along with Diaz-Canel. The new president and his colleagues were due to be sworn in on Thursday.

While this week’s assembly is promoting younger leaders of government, Castro and other elders of the revolution will retain considerable power in their roles as senior leaders of the Communist Party at least until a party congress set for 2021.

Castro, who had served for decades as defense minister, became president in 2008 when his older brother, Fidel Castro, formally handed over power as his health deteriorated. Fidel Castro died in 2016 aged 90.

Emerging from his charismatic brother’s shadow, Raul Castro significantly thawed relations with the United States for the first time since the revolution took the island on a sharply leftward path, reaching an agreement with former U.S. President Barack Obama to restore diplomatic ties.

He also introduced some market reforms to one of the world’s last Soviet-style centrally planned economies.

Cuba’s economy remains smaller than it was in 1985, when it had the support of Communist ally, the Soviet Union, according to one study. It is suffering from a crisis in oil benefactor Venezuela. Relations with the United States are strained anew under President Donald Trump and Cuba has few allies in the region.

Diaz-Canel should “increase the speed of change in Cuba while preserving the good things,” said blogger Harold Cardenas, 32, adding that resistance from within the party to Castro’s economic reforms had held the country back.

Political observers said Diaz-Canel would be given the job of reviving the economy, but would seek Castro’s approval on major strategic decisions such as the U.S. relationship.

“Castro will remain the ultimate political arbiter until 2021 and possibly beyond,” Nicholas Watson, of political risk analysts Teneo Intelligence, said in a client note.

Cause of tourist’s death determined