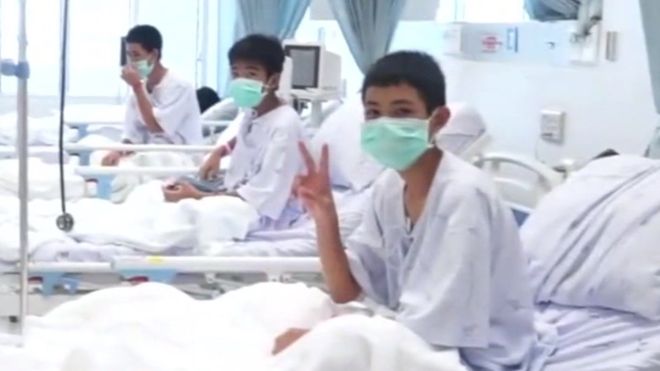 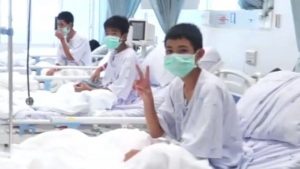 The first pictures have emerged from the hospital where the Thai boys are being treated, after their dramatic rescue from a flooded cave system.

In the grainy images, several boys can be seen in face masks and hospital gowns, at least one giving a victory sign for the camera.

The pictures were published as new details emerged of the enormously complex effort to bring them out alive.

The Thai Navy Seals also released new video showing how the rescue worked. Sources in the rescue operation, including divers who took part, told the BBC that the boys were heavily sedated ahead of the rescue to prevent them panicking in the dark, narrow, underwater passageways.

They were then strapped to one of two rescue divers tasked with shepherding each boy through the underwater parts of the system, and bundled into stretchers to be carried through the dry parts.

There were conflicting reports in the hours after the rescue about the extent to which the boys had been medicated before they were brought out. The Thai prime minister on Tuesday denied reports that they had been sedated, saying the boys were given only light anti-anxiety medication commonly provided to soldiers.

But several sources have since confirmed that the boys were only partially conscious as they were brought out.

All of the boys lost weight during their ordeal and will remain in hospital for a week, followed by a week’s recuperation at home. Public health ministry officials said the first group were all eating normal food and the second group would be put on normal food as of Wednesday.

The third group evacuated on Tuesday are undergoing the same medical check-ups as the first two groups but appeared to also be in good health. There are no cases of serious infections.

The first four boys have already been visited by their families, officials said, and the second group will also be allowed to receive visitors later on Wednesday.