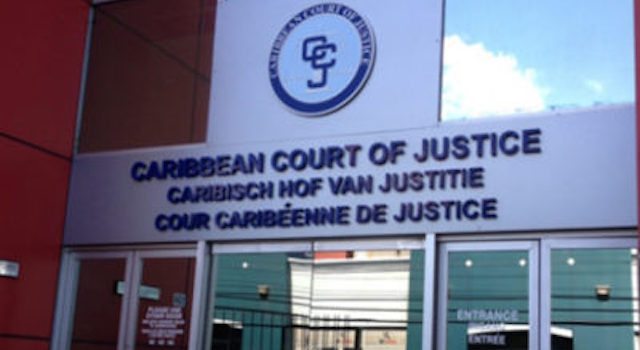 The Caribbean Court of Justice (CCJ) has granted an injunction restraining GECOM, its officers and agents from taking any steps to prejudice the fair hearing of the appeal, including but not limited to, issuing a declaration of the results of the elections held on March 2, 2020, until the CCJ issues final orders in relation to the appeal.

The appeal was filed by the People’s Progressive Party/Civic (PPP/C) following the Court of Appeal’s ruling injecting the term “valid” votes into the Constitution. Due to the nature and urgency of the matter, the CCJ has set July 1 for the hearing.

This all played out on Tuesday, even as the dust settled from the Court of Appeal (COA) ruling on Monday. Former Attorney General Anil Nandlall announced that the PPP had approached the CCJ.

In the Notice of Application (NOA), PPP/C President-elect Dr Irfaan Ali and the party’s General Secretary Bharrat Jagdeo are named as the applicants. On the other hand, A Partnership for National Unity/Alliance For Change (APNU/AFC) supporter Eslyn David, the woman who approached the COA for an order blocking the declaration of results, is the first-named respondent.

In the appeal, Ali and Jagdeo contended that Appeal Court Judges Dawn Gregory and Brassington Reynolds erred in law by finding that the COA had jurisdiction to hear and determine David’s appeal in spite of the absence of rules granting it the jurisdiction to deliberate on the issue of an election of the President.

The NOA also noted that the two Judges, who were not supported by fellow Justice Rishi Persaud, erred by finding the COA had jurisdiction to consider David’s motion despite the process to elect a President not being completed. In addition, they pointed out that the questions raised by David’s motion fell squarely within the jurisdiction of the High Court, under Article 163 of the Constitution of Guyana.

They also contended that the two Judges erred by “finding that the Guyana Elections Commission has the jurisdiction to assess, qualitatively and quantitatively, whether the tabulation of the votes as recounted and tabulated by the Chief Elections Officer constitutes “a final credible count” or otherwise enquire into the credibility of the tabulated votes arising out of the recount.”

According to the applicants, the two Judges misinterpreted GECOM’s orders (Order 60 of 2020) and intentions, instead of limiting themselves to interpreting the Constitution as it relates to the COA’s jurisdiction. Their ruling, according to the applicants, undermines the constitutional doctrine of separation of powers by authorising GECOM to usurp the High Court’s jurisdiction.

“The issues which are engaged by this appeal are of fundamental importance and will, inevitably impact the outcome of the General and Regional Election, the outcome of which is a matter of tremendous domestic and international concern and importance,”

“The Constitution and relevant legislation governing elections in Guyana have provided for the independence of GECOM which said independence has been directly impugned in the Motion of Eslyn David and the decision of the Court of Appeal.”

According to the NOA filed on their behalf by Trinidad-based Senior Counsel Douglas Mendes, Nandlall and attorney Devindra Kissoon, the applicants are seeking leave to appeal the Court of Appeal decision. They are requesting that the matter be urgently heard and that the application be treated as the hearing of the appeal.

The CCJ has since obliged the appeal, setting July 1 for the hearing of the appeal, with a case management conference expected to be held on Thursday, June 25. Further, the CCJ informed the parties in the matter that interim orders to bar GECOM from making a declaration before the case is heard will be granted by today.

The reason for this became clear on Tuesday, as Lowenfield attempted to present a report for the declaration of numbers that was so heavily doctored that the GECOM Chair refused it. In addition, Lowenfield’s report has come in for heavy criticism across society.

The elections and the National Recount of ballots had shown that based on 2339 Statements of Recount (SoRs), the PPP/C, whose Presidential Candidate is former Housing Minister Dr Irfaan Ali, received a total of 233,336 votes.
This is 15,416 more votes than their nearest rivals, the incumbent APNU/AFC, which received 217,920 total votes. When one calculates using the Hare formula, it means that PPP/C would have secured 33 out of 65 seats in the National Assembly and APNU/AFC would have secured 31.

However, Lowenfield in his report arbitrarily awarded the APNU/AFC 171,825 votes while awarding the PPP/C 166,343 votes. By his calculations, Lowenfield disenfranchised over 115,000 voters. He also awarded APNU/AFC 33 seats, PPP 31 and one seat for the joinder parties.