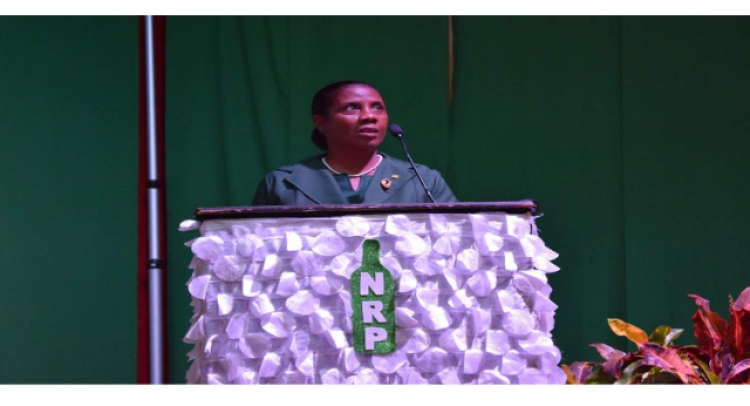 Hours after securing her party’s nod to become NRP’s fourth elected Political Leader, Dr. Janice Daniel-Hodge, said that the “CCM cannot and will not be given 5 more years to take Nevis further down a path of despair and frustration and victimization.”

Daniel-Hodge, who is also the daughter of the party’s co-founder and first Premier of Nevis, Sir Simeon Daniel, is a newcomer to elective politics, but promised her supporters that “We will unite and create a movement of historic proportions because we have only one option, we have only one purpose, we have a clear vision and that is to win the next election.”

During the last elections, approximately three years ago, CCM defeated the NRP by winning four of the five seats, with the opposition only managing to hold its stronghold constituency of St. Thomas, that former premier and former leader, Joseph Parry picked up easily.

And when the General Elections were held in June this year, CCM also delivered a severe political blow to NRP, winning all three federal seats, for the first time, including the one NRP always held, (St. James/St. Thomas).

But this setback seems not be a bother to Dr. Daniel-Hodge, who leveled some tough criticisms at the political doorstep of the CCM, claiming that “after decades of a CCM government, Nevisians are once again suffering and struggling…”

The NRP leader, who some say is also eyeing a run in the St. James Parish against CCM’s incumbent Alexis Jeffers, when the next local elections are held in 2022, promised that despite the suffering caused by the CCM, NRP “will once again come to the rescue.”

She reminded her NRP colleagues, whom she referred to as “comrades”, that “we are all children of NRP and we will not depart from our principles.”

“The principles upon which this party was founded, inclusivity, integrity, innovation, industry, (are) the reasons why I am here today…,”said Daniel-Hodge.

NRP, she added, was born out of decades of suffering and struggles and NRP had a vision for Nevis.

Under its watch, she said Nevis prospered. NRP had a strong foundation for the development of Nevis, but all that she argued has been destroyed by the current CCM government.

The battle for the leadership of NRP was fought between Dr. Hodge and NRP’s lone Member of the Nevis Island Assembly, Cleone Stapleton-Simmonds, who only made her political debut this year.

Dr. Hodge, expressed comforting and supporting words to Stapleton-Simmonds, saying that “We are all one NRP family.”

“Cleone Stapleton Simmonds, I am convinced that with your skill sets, to complement the ones I bring to the table, NRP is in a great place,” said the leader, to the woman she had just defeated, but with whom she had also just made history.

NRP is also the only party in the country, ever to have their tops posts occupied by women…President, Vice President and Second Vice President.

“The wave of change in NRP continues today,” added the NRP leader.

“We will unite so that our children and generations to come, can have a brighter future in our beloved Nevis,” stated the new NRP boss, perhaps targeting critics who claim that the party is fractured.

She also promised that the party will consolidate its efforts, under one NRP. “We will unite in this campaign, so that our stalwarts may be proud and know that their hard work was not in vain.”

The new NRP Executive is made up of:

Main photo: Janice Daniel Hodge while speaking at the convention after being elected Sunday