Amory’s CCM won three of the five seats up for grabs in the elections held on Tuesday 22nd January, 2013. It was a rather decisive victory for the CCM which had been in opposition since 2006.

This was the second island poll in two years, following the 11th July, 2011 controversial election that led to court action over massive voter disenfranchisement that had negatively impacted the CCM. 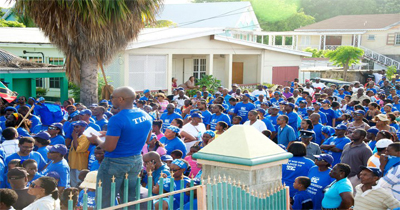 The courts eventually declared one of the seats vacant after ruling that based on the serious levels of electoral irregularities, there was sufficient evidence to declare the poll in the constituency of St. John’s, null and void. Instead of calling the required by-election in the lone constituency, the ruling party of Mr. Parry decided to take their chances in an island-wide poll instead. He lost the gamble, paving the way for the return of a CCM Island Administration.

(More details will be provided in a subsequent report)

Polls Closed in Nevis, the Island Awaits the Results