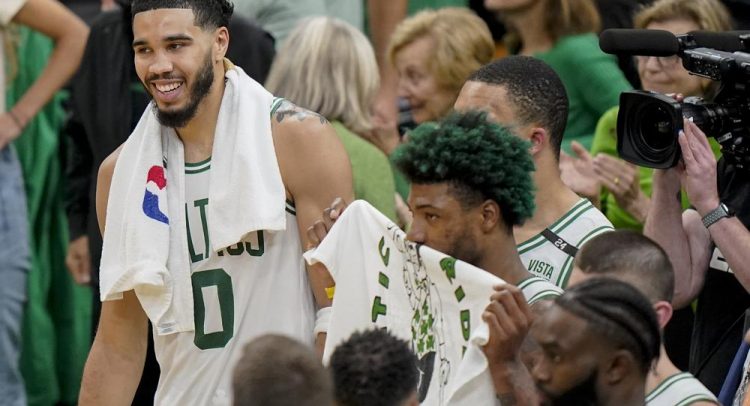 BOSTON (AP) — Throughout the postseason, the Boston Celtics had played their best basketball away from home.

Jaylen Brown scored 27 points, Jayson Tatum added 26 and the Celtics rode the energy of a raucous TD Garden crowd to beat back another third-quarter onslaught by Golden State in a 116-100 victory Wednesday night that gave them a 2-1 lead in the NBA Finals.

Marcus Smart added 24 points and helped fuel a defensive effort that held the Warriors to 11 points in the fourth quarter — third-fewest in a finals game in the shot clock era.

“Game 2, they brought the heat to us,” Smart said. “For us, that left a bad taste in our mouth because what we hang our hat on is effort on the defensive end and being a physical team. It definitely woke us up a little bit.”

Tatum said the fact the Celtics didn’t hang their heads after the Warriors’ third-quarter flourish is something they didn’t always do in the regular season.

“I think that’s when we are at our best when we respond to tough situations. We respond to teams going on runs and things like that,” he said. “I think we did that several times tonight.”

Boston improved to 6-4 at home, compared to 8-3 on the road this postseason. The Celtics haven’t lost two straight games since the end of March.

Stephen Curry led Golden State with 31 points and six 3-pointers. He had 15 points in a 33-25 third quarter by the Warriors but was hurt late in the fourth after Al Horford rolled into his leg on a loose ball. Curry said it was similar to a play during the regular season in which Smart dove into Curry’s legs while chasing a loose ball but “not as bad.”

“I got caught — obviously in some pain, but I’ll be all right,” Curry said. “See how it feels tomorrow and get ready for Friday.”

Klay Thompson broke out of a finals slump and finished with 25 points and five 3s. But the Warriors’ shooting couldn’t save them on a night the more athletic Celtics outmuscled them for a 47-31 rebounding advantage.

“When you allow a team to get comfortable, especially in their home — in front the home crowd, then it’s tough,” Warriors forward Draymond Green said.

Robert Williams III, who has been working his way back from knee surgery, finished with eight points, 10 rebounds and four blocks.

“We talked about it quite a bit, our group being resilient and being able to fight through a lot of things and at times when it’s most needed being able to lock down on defense,” Celtics coach Ime Udoka said. “We did in the fourth quarter,”

Game 4 is Friday in Boston.

Despite Curry’s noticeable limp after the play with Horford, Warriors coach Steve Kerr said it was not why he pulled him from the game in the closing minutes.

“The injury didn’t force him out of the game, but I took him out down 14 with two minutes left because we weren’t going to catch up,” Kerr said.

The previous 39 times teams have split the first two games of the finals, the winner of Game 3 went on to win the series 82% of the time.

Feeding off the energy of a Garden crowd that jeered Green throughout his miserable night in the first NBA Finals game in Boston since 2010, the Celtics started fast and led by as many as 18 points in the first half.

Coming off a Game 2 loss in which Boston turned the ball over 19 times, the Celtics’ ball movement was much crisper in the half court, which led to open perimeter shots, favorable 1-on-1 matchups and driving lanes..

It left the Warriors scrambling at times, which contributed to three foul calls on Curry in the opening 24 minutes.

But as well as Boston played, it had its early lead erased in the third quarter by a Warriors seven-point possession that included a four-point play by Curry when he drew a flagrant 1 foul on Horford and 3-pointer by Otto Porter Jr to put Golden State in front 83-82.

Boston recovered to take a 93-89 edge into the fourth, then outscored Golden State 23-11 in the quarter.

Celtics: Shot 57% in the first half (27 of 47. Including 8 of 18 from 3. … With two 3-pointers by Brown in the first quarter, he and Tatum became the first pair of teammates in Celtics history to each make 50 3-pointers in a single postseason.

Green was involved in tussles with Brown and Grant Williams in Game 2 – one that ended in a technical foul call on Green.

He had another brief run-in with Williams in the second quarter Wednesday when Williams knocked Green to the ground at midcourt.

A foul was called on Williams, but he and Green had a short face-off before being quickly separated by officials.

In third quarter, Green wound up on the ground fighting for a loose ball with Brown. This time Green was called for the foul.

The Celtics hit three of their first four shots and scored 10 straight points to jump out to 10-2 lead.

Boston’s lead grew to 18-9 when a fast break ended with Curry picking up his second foul trying to contest Smart’s layup with 5:44 left in the quarter.

Curry stayed in the game and Golden State switched to zone, but it did little to slow Boston, which widened its advantage as high as 15 points. The Celtics took a 33-22 lead into the second period.