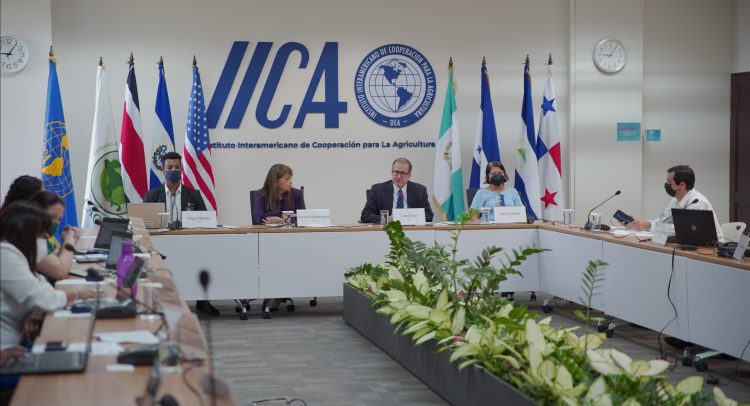 San Jose, 17 May 2022 (IICA). Central America and the Dominican Republic are seeking to establish regional regulations on biopesticide registration that will equip farmers with environmentally friendly alternatives for pest control in crops, while providing greater consumer health protection and trade facilitation, based on scientific expertise.

To this end, delegates from regulatory institutions in the region sought to make headway in developing the draft Central American Technical Regulations (RTCA) on Biopesticides, during a meeting in Costa Rica, convened by the Inter-American Institute for Cooperation on Agriculture (IICA), the United States Department of Agriculture (USDA) and the Central American Agricultural Council (CAC).

The initiative to develop the regulations falls under the Harmonization of Pesticide Registration Procedures and Maximum Residue Levels project, which IICA and the USDA are spearheading in the region.

Lloyd Day, Deputy Director General of IICA”, remarked that, “The development of a modern regulatory framework that is standardized across the region will be extremely beneficial for the countries. The tremendous value of supporting this science-based process and promoting international harmonization must be highlighted, as it will assist in driving trade and ensuring adequate levels of protection”.

Day also pointed out that biopesticides “help to create sustainable agrifood systems and to ensure continued access to international markets at a time when the prevalence of national and regional policies on maximum residue limits are endangering harmonization and science-based decision- making”.

Nigel Hunter, manager of the USDA/FAS global pesticide program stated that, in the current scenario, where we face serious challenges from climate change, “agriculture has a tremendous role to play in providing answers and finding more sustainable livelihoods and alternative methods of crop protection”.

Thus, he said that, “Regulations will play a key role in chemical residue mitigation, the promotion of food safety and in enabling Central America to lead the way in biopesticide registration in the global context.

The process will continue over the next few months, with a view to consolidating draft regulations, which will be submitted to the Secretariat of the Central American Economic Integration (SIECA), for negotiation and approval.

“The expectation is that by the end of the year, the region and technical institutions that are assessing the issue of biopesticides will have developed a consensus document. Once we have that, we will submit the draft to SIECA. This will allow the countries of Central America and the Dominican Republic to enjoy a harmonized regulatory framework, in line with international bioinput regulations”, explained Eric Bolaños, IICA Agricultural Health Specialist.

The draft document will be submitted to SIECA, through the Executive Secretariat of the Central American Agricultural Council (CAC).

Lucrecia Rodríguez, Executive Secretary of the CAC, said that, “We want to be actively involved and you can count on our support in pulling together stakeholders to approve these regional technical regulations, as part of this very productive process, which we hope will bring about the necessary effectiveness in the area of biopesticides”.