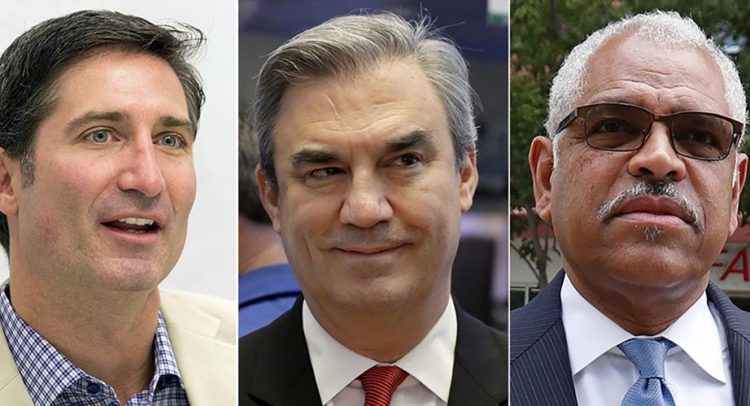 CEO pay rises to $12.7M even as pandemic ravages economy

NEW YORK (AP) — As COVID-19 ravaged the world last year, CEOs’ big pay packages seemed to be under as much threat as everything else.

Fortunately for those CEOs, many had boards of directors willing to see the pandemic as an extraordinary event beyond their control. Across the country, boards made changes to the intricate formulas that determine their CEOs’ pay — and other moves — that helped make up for losses created by the crisis.

As a result, pay packages rose yet again last year for the CEOs of the biggest companies, even though the pandemic sent the economy to its worst quarter on record and slashed corporate profits around the world. The median pay package for a CEO at an S&P 500 company hit $12.7 million in 2020, according to data analyzed by Equilar for The Associated Press. That means half the CEOs in the survey made more, and half made less. It’s 5% more than the median pay for that same group of CEOs in 2019 and an acceleration from the 4.1% climb in last year’s survey.

At Advance Auto Parts, CEO Tom Greco’s pay for 2020 was in line to take a hit because of a mountain of pandemic-related costs. Extended sick-pay benefits and expenses for hand sanitizer and other safety equipment totaling $60 million dragged on two key measurements that help set his performance pay. But because the board’s compensation committee saw these costs as extraordinary and unanticipated, it excluded them from its calculations. That helped Greco’s total compensation rise 4.7% last year to $8.1 million.

At Carnival, the cruise operator gave stock grants to executives, in part to encourage its leaders to stick with the company as the pandemic forced it to halt sailings and furlough workers. For CEO Arnold Donald’s 2020 compensation, those grants were valued at $5.2 million, though their full value will ultimately depend on how the company performs on carbon reductions and other measures in coming years. That helped Donald receive total compensation valued at $13.3 million for the year, up 19% from a year earlier, even as Carnival swung to a $10.2 billion loss for the fiscal year.

Meanwhile, regular workers also saw gains, but not at the same rate as their bosses. And millions of others lost their jobs.

Wages and benefits for all workers outside the government rose just 2.6% last year. That’s according to U.S. government data that ignore the effect of workers shifting between different industries. It’s an important distinction because more lower-wage earners lost their jobs as the economy shut down than professionals who could work from home.

This should have been a year for shared sacrifice,” said Sarah Anderson, who directs the global economy project at the left-leaning Institute for Policy Studies. “Instead it became a year of shielding CEOs from risk while it was the frontline employees who paid the price.”

The AP’s compensation study included pay data for CEOs at S&P 500 companies who have served at least two full fiscal years at their companies, which filed proxy statements between Jan. 1 and April 30. It doesn’t include some highly paid CEOs who don’t fit that criteria. The pay figures for CEOs sometimes include grants of stock and options they may never ultimately receive unless they hit certain performance targets.

Last year’s 5% gain for median CEO pay masks how much variation in pay there was beneath the surface. Some companies thrived as a direct result of the pandemic. Sales boomed for Lowe’s amid a great nesting across the country, and CEO Marvin Ellison’s pay nearly doubled after its stock more than doubled the S&P 500′s total return through its fiscal year.

Other CEOs, meanwhile, saw their compensation cut. At Duke Energy, the board reduced CEO Lynn Good’s short-term performance pay after its earnings per share fell short of its initial target, partly because industrial customers used less power during the pandemic. Good’s pay dipped 2.6% to $14.3 million, even though earnings ended up within the range Duke forecast for Wall Street early in the year. Duke didn’t adjust formulas to raise Good’s pay because of the pandemic.

Overall, 61% of the 342 CEOs in this year’s survey did get a boost in compensation last year. That’s almost the exact same percentage as the 62% in 2019, when the economy and corporate profits were growing.

That’s also despite several CEOs taking high-profile cuts to their salary during the year as an act of shared sacrifice and to conserve a bit of cash for the company. Roughly one of every five CEOs in this year’s survey had a smaller salary for 2020 than the year before.

But salary is often just a minor piece of a CEO’s total compensation, which is derived from notoriously complex formulas. Each year, companies fill pages of their proxy statements with charts and footnotes showing how the bulk of their CEO’s pay rises and falls with corporate performance. It’s here, in the nuanced area, where many companies adjusted levers that ultimately helped CEOs get more in compensation.

Boards typically stick with the formulas set for CEO pay early each year, but the global economy’s sudden crash forced a reconsideration. What made things even cloudier was that they had few historical guides for how to proceed.

“Many committees asked us this very question: Does this compare to the financial crisis? What did people do then?” said Melissa Burek, partner at Compensation Advisory Partners, a consulting firm that works with boards.

But the pandemic was very different than the 2008 economic collapse, mainly because this crisis was caused by a virus, rather than by CEOs taking on too much debt and risk. As boards adjusted targets to make CEOs’ incentive pay less difficult to get, many also limited the size of the possible payouts.

“I think there is a recognition, when unemployment is so high, of: Do we feel good about paying our CEO at this level?” said Kelly Malafis, also a partner at Compensation Advisory Partners, of the thinking by boards of directors. “The answer is: ‘We’re doing this for performance. When performance is not good, we don’t pay. When performance is good, we do pay.’”

At Carnival, for example, the company says that much of its CEO’s compensation is tied to the company’s financial and operational performance. The company said Donald received no cash bonus tied to 2020. And to preserve cash in the pandemic, the company gave him grants of restricted stock instead of salary from April through June. Then from July through November, it cut Donald’s salary by half.

RATTLING AT THE GATES

Progressives in Washington are pushing for rules changes to narrow the gap between CEOs and workers.

Companies have to show how much more their CEO makes than their typical worker, and the median in this year’s survey was 172 times. That’s up from 167 times for those same CEOs last year, and it means employees must work lifetimes to make what their CEO does in just a year.

One bill in Congress proposes to raise taxes on corporations where the CEO makes 50 times or more than the median worker at the company.

At some companies, shareholders are pushing back on compensation packages approved by the board.

At the annual meeting of Chipotle Mexican Grill’s shareholders earlier this month, just 51% of voting shares gave a thumb’s up to its executives’ pay packages, compared with 95% a year earlier. Across the S&P 500, such “Say-on-pay” votes routinely get more than 90% approval.

Chipotle’s board excluded three months of sales results from the worst of the pandemic, along with several other items, while calculating pay for its CEO, Brian Niccol. That allowed him to get bigger compensation than he would have otherwise.

Chipotle called the move a one-time modification that’s not reflective of Niccol’s ongoing pay package. Chipotle was one of the relative winners of the pandemic, with revenue rising 7.1% and its stock soaring 65.7%.

While they’re nonbinding, “Say-on-pay” votes are getting increasing attention from Wall Street. Between 2017 and 2019, stocks of companies that failed their votes lagged sharply behind the S&P 500 in the following 12 months, according to Morgan Stanley.

The trend didn’t hold last year, when the pandemic may have unsettled everything, but Morgan Stanley strategists say they still see failed “Say-on-pay” votes as a red flag that a stock may struggle.

And if there’s anything that investors on Wall Street care about, it’s how well they’re getting compensated.

FILE – This photo combo shows from left, Brian Niccol, CEO of Chipotle, Advance Auto Parts CEO Tom Greco, Carnival Corp. CEO Arnold Donald. Pay packages rose yet again in 2020 for the CEOs of the biggest U.S. companies, even though the pandemic sent the economy to its worst quarter on record and slashed corporate profits around the world. (AP Photo/File)