Given the distress of the many Amazon Warriors’ fans (mainly Guyanese immigrants in St Kitts and Nevis), it was left to Gayle himself, to entertain the large crowd and give them some value for money. And the world champion, did not disappoint them. Gayle propelled the chase with his third fifty-plus score of the season, reaching his half-century off 22 balls and ending up with 54 off 27 balls.

The fact is, Jamaica is two-time CPL champions because the franchise is blessed with “real champions”, as DJ Bravo sang in his popular song, “Champion.” The song, released by Dwayne Bravo in March 2016, caught the imagination of all cricket fans after DJ Bravo, captain Darren Sammy and Chris Gayle and the rest of the winning West Indies T20 team celebrated the win over India in the semifinals of the ICC World T20 in April this year.

Yes, Christopher Henry Gayle is a champion! Having previously scored one century at the beginning of the tournament, and having failed to unleash his Gayle-storm fury, the batting showman dominated the Amazon bowlers with a brutal half century and ended the campaign as his side’s leading scorer with 425 runs, third overall behind Amazon Warriors’ Chris Lynn and St Lucia Zouks’ Johnson Charles.

Secondly, Andre Russell is a real champion! DJ Bravo says in the song, “don’t vex if your name not call; We have to leave time to bat some ball.” He must have been referring to unnamed Caribbean cricketing champions, like Andre Russell. It is amazing how a champion athlete this young man is.

Andre Russell, just recently married; restricted through injury throughout the CPL tournament and, not having performed exceptionally well with the bat, in the Eliminator on Friday 5 August, struck a 42-ball century, his first in T20 cricket, to lift Jamaica Tallawahs to 195 and set up a convincing win over Trinbago Knight Riders, sealing their place in the CPL 2016 final.

But wait! Not so fast! Do you know our Caribbean champions? Are you aware of the global celebrities in our Caribbean society? Or are you distracted by the voice of doom and disturbance that only speaks of hate for our high regional performers?  DJ Bravo, from Trinidad and Tobago, one of the most celebrated and sought-after global sports personalities, celebrates greatness (particularly black greatness, ingenuity and excellence), dominance (as in the influence on global politics and sports) and independence (the elusive dream of the modern millennial black generation) in his popular song “Champion.”

Yes, “Champion” is a call to wake up the black man and woman as to who he/she is and his/her capacity to excel above the impediments that are placed before them by a civil society that sets our people very little to aspire; a state (government and status apparatus) that has turned against us as a people rather than protecting us and our interest; and a market which keeps unscrupulous businesses and investors rich by ensuring that the poor remains hungry, as Bob Andy taught in his song , “Check It Out” recorded in 1974.

Sadly, many of our young people are distressed by “the voice of pessimism and doubt,” are rapidly losing their sense of identity – many of them do not even know who they really are, and what they represent. “Champion” calls us (all Caribbean people here and in the diaspora) to take action – dance the champion dance, which says to the opponents, I am moving forward because I am a champion.

My people, there is “an evil voice” that is orchestrated to depress us, weary us; frustrate us; romance our failures; and bring-down our best efforts in the Caribbean region, and would have you believe that our current cricketing champions are economic mercenaries in search of filthy lucre all over the world.

They lie; this is the voice of disharmony in our midst; the voice that is bent on maintaining the status quo by any means necessary; the voice of the class that benefits from keeping the poor where they are and protecting the interest of the privileged few in our increasingly in-egalitarian Caribbean society (I beg you just take a moment and listen to Bob Andy’s song, “Check it Out.”)

On the contrary, we have produced champions in education, music, politics, economics, literature, science and technology and sports, just to name a few areas. DJ Bravo is right. Apart from our Noble Prize winners, (Derek Walcott and Arthur Lewis from Saint Lucia and VS Naipaul from Trinidad and Tobago), our current cricketers – Kieron Pollard, Sunil Narine, Dwayne J Bravo, Andre Russell and Chris Gayle –  are world champions, sought-after by every global premier franchise and worshipped by millions because they bring people so much joy, so much happiness, and so many moments of pleasure and recreation, both in the sporting arena or in the living room.

They make us as a Caribbean region and people more visible in the global society, because they are so endeared to the Caribbean; they make us proud every time they are asked to celebrate their achievement (particularly in the post-match press conferences) because they always attribute their feats to God the Creator (a testimony to the Christian values instill in them as children – let Caribbean men and women do more of this talking instead of the persistent criticism of our young people).

Like DJ Bravo says, there are other champions. Allow me to humble present Warner Park as a champion – a champion international sporting venue; a champion at hosting international events, beginning with the 2007 World Cup until now. Each CPL match at Warner Park was a spectacle (some grander than others depending on what was at stake); a contest witnessed by an assembly of passionate and knowledgeable cricket fans; each event mirrored a re-enactment of the spirit of carnival with its splendor, colors, dancing, reveling and chanting.

Warner Park played well; assisted the brave; punished the weak; but celebrated the exceptional. Kittitians have a right to dance to the tune of champion, because Warner Park and St Kitts and Nevis are champions – real champions. Well, my people; you will be better off for hosting the 2016 CPL.

But what did Warner Park teach us during the 2016 Hero CPL tournament? Thanks to Warner Park, we were forced to remember that we are one people; our hopes and aspirations are similar; our champions are our own Caribbean children; our champions love us and we should cherish them; defend them and celebrate them.

Jamaica Tallawahs are the worthy Hero CPL champions of 2016, but like DJ Bravo said, they are our champions. We are therefore all winners; we all have a right to celebrate with Chris Gayle and Andre Russell for the pleasure they gave us are indeed priceless.

Paul exhorted in his letter to the Romans, “Rejoice with those who rejoice.” (Romans 12:15, NIV). Even if the St Kitts and Nevis Patriots did not do well, can we truly celebrate our opponents, the Jamaica Tallawahs? Remember, “I can do all things through Christ who gives me strength” Philippians 4:13, NIV. Already encouraged by their 4-1 victory from the first game in a ‘best of three’ finals, Conaree went in to the second match with S.L. Horsford’s St. Pauls, with much expectation and hope that this time, this year, this was the finals when they would be triumphant.

Last year they also made it to the finals but lost to Newtown and were not willing, two years in a row, to have history repeat itself with another defeat.

Though the match remained a tamed battle for most of the first half at nil-nil, it eventually took a solid right-footer from Andy Liburd, in the 89th minute, to unfold the victory that all night seemed pre-packaged for a team that was on the hunt for greatness.

Liburd’s successful shot that found the back of the net, however, only came after they fired about four others, right in front of the goal line, but failed to meet their mark. The crowd erupted when Liburd’s powerful footer streamed past the St. Pauls custodian.

As if they knew that this would be it, that this was the night, hundreds of residents from the small village of Conaree, were out to provide the support for their team, decked in their yellow and green; the colours representative of the club.

There were grand-mothers and little toddlers mixed with the scores of ardent football fans and villagers. As one spectator commented, “this is one night that no one is home in Conaree…Conaree empty right now and all de people up de stadium.”

Everyone wanted to share in the glory of the victory, including the politicians who turned out.

There to offer words of congratulations was the Parliamentary Representative for the area, Member of Parliament, Eugene Hamilton, who was observed sharing in the victory celebrations with the team, as they paraded their championship trophy.

He is quoted in a release from his party as saying, “Winning is not a ‘me’ thing, it’s a ‘we’ thing,” and the success of Conaree exemplifies this. It is this mentality and their months of hard work that have resulted in this their first Championship after being in the Premier Division for less than decade. They exuded the fighting championship spirit the Conaree community is known for, and which has made one of their favourite sons Fighting Hunks, a Caribbean Boxing Champion.”

On Tuesday, Fighting Hunks was teased by the country’s Prime Minister, Dr. Denzil Douglas, who in a friendly and sporting discourse on local radio with the former boxer and resident of Cayon, said that he would walk with a handkerchief to wipe the tears of Hunks, because St. Pauls, would have been the victors. Dr. Douglas is also the Parliamentary Representative for the village of St. Pauls.

As it turned out however, Hunks did in fact need such a handkerchief, but not to wipe tears of sadness, but those that flowed with joy and excitement and the perspiration that was evident as he, despite his confinement to a wheelchair, joined in the grand celebration of victory.

While showering praise to the team Hamilton declared, “I congratulate the team and their coach, Isaiah Morris. The dedication shown by each and every player on the field serves as an inspiration to us all and a reminder of the success that our young people can achieve with a commitment to hard work”. Hamilton also congratulated the other teams in the final four, said the release.

The large crowd of football fans and supporters included the nation’s Governor General and Prime Minister.

It was a moment in time for the Conaree residents and team, not only for the victory on the field, but as one female supporter stated, it is a proud moment  that has lifted the spirits and pride of a residential district that has suffered its unfair share of ridicule. 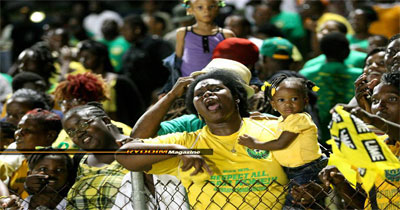 But all the past negatives about Conaree did not stop their march to victory as their goal-keeper, Clifford Samuel, was also adjudged Most Valuable Player of the finals.

Evansroy Barns of SPD United won the Rookie of the Year Award.

The final results of the 2013 premier Division were as follows: