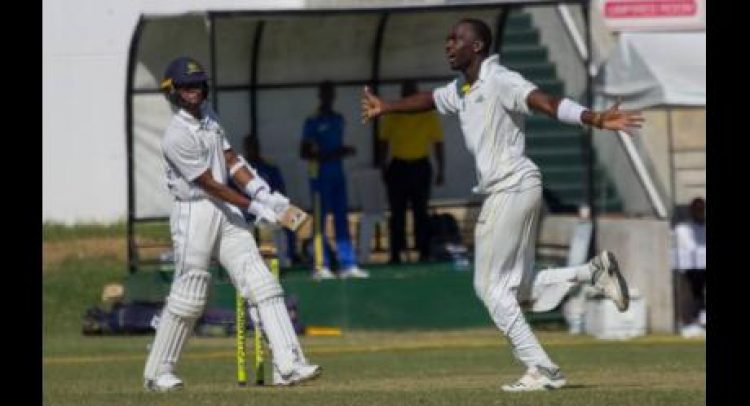 Pace bowlers Oshane Thomas and Marquino Mindley are upbeat about their time spent so far in England as the Windies prepare to face the hosts in a biosecure three-Test series starting on July 8.

The Jamaican duo are part of a 25-man tour party that has been under quarantine for over two weeks because of COVID-19 prevention protocols and are now training and preparing at the Emirates in Old Trafford.

Mindley, who is embarking on his first senior tour, says the experience so far has been tremendous.

“I get to be in the dressing room with a lot of international players, and I’ve been able to learn quite a few things from them,” he said. “It’s good to be in the same dressing room as them. I really cannot express my gratitude enough to Cricket West Indies.”

For Thomas, the rise to international has been meteoric; however, the burly Melbourne Cricket Club pacer is adjusting slowly but surely to the English conditions, which are quite different from what he is used to, although he did have previous experience with them during the ICC World Cup last year.

“For me, the number one difference here in England, as compared to the Caribbean, is that you have to pitch up the ball a bit more,” Thomas said. “My natural length in the Caribbean requires a bit of adjustment because the ball will swing significantly more here.

“I have to come a touch fuller so that I could get more purchase. So yes, because of the difference in climate, you have to give yourself more of a chance by bringing up the ball.”

INVALUABLE LESSONS
Both Mindley and Thomas said the extra work that they have been doing with bowling coach Roddy Estwick has been invaluable.

“Coach Estwick has helped me to improve since coming over here to England,” Mindley said. “I’ve learned that in my bowling, I need to push towards the target more, rather than close off my body, and I am seeing the results.”

“We have been working on my length and my run-up, mostly,” Thomas said. “The drills help me to keep my arm straight while coming over, and that is something that will improve my bowling a lot, and I think we’re definitely getting there.

“I’m keeping my body straight and falling away less on this tour so far.”

Both players will be involved in a three-day squad practice match, which will take place at Old Trafford starting tomorrow.