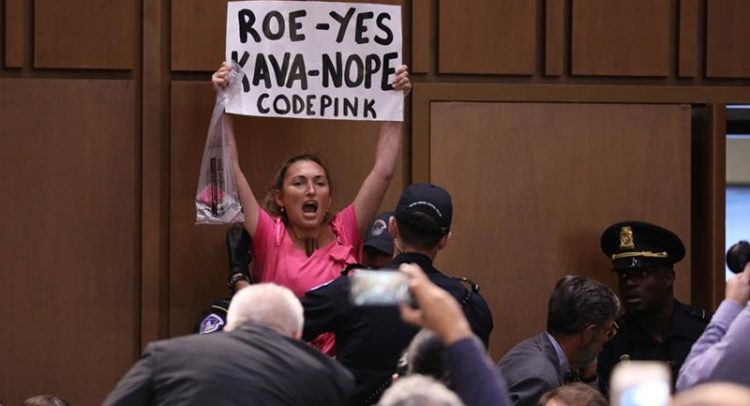 The confirmation hearing for US President Donald Trump’s Supreme Court nominee quickly descended into chaos on Tuesday with Democrats demanding a postponement and protesters shouting loudly.

Republicans hoped to use the four-day hearing as an opportunity to highlight Kavanaugh’s distinguished career as a US Court of Appeals judge in Washington, DC.

But within moments of Senate Judiciary Committee Chairman Chuck Grassley banging the gavel, Democrats launched what appeared to be coordinated protests against moving ahead with the hearing on Kavanaugh’s lifetime appointment to the highest US court.

Kavanaugh – holding his daughter’s hand and smiling broadly as he entered the hearing rooming – sat stone-faced minutes later as legislators spoke loudly over one another, and protesters erupted in anger from the back of the hearing room, leading police to eject them from the proceedings.

Democrats repeatedly broke into Grassley’s opening remarks to demand a halt in order to be allowed time to study the 42,000 pages released by the White House just 15 hours before the start of the hearing.

The scenes were extraordinary, even for those with decades of Capitol Hill experience, as legislators spent more than an hour debating a path forward.

“This is something I’ve never gone through before,” Grassley acknowledged.

Grassley argued the panel has already received more than 400,000 pages of Kavanaugh-related documents.

Democrats also pushed for the release of 100,000 more pages they say are being withheld by the administration, particularly those related to his time in former President George W Bush’s legal office and as White House staff secretary.

“What is the rush? What are we hiding by not letting these documents come out?” asked Senator Cory Booker.

Kavanaugh, 53, would replace retired swing-vote Justice Anthony Kennedy, a move that could solidify a hard-right majority on the nine-member court and help shape key aspects of American society for a generation or more.

Republicans hold a one-vote majority in the Senate.

Should a single Republican defect to oppose Kavanaugh, it could throw his confirmation into jeopardy, but there has been little sign that any member of the GOP was prepared to buck Trump and their party leadership.

In excerpts from his opening statement, Kavanaugh said he is a “pro-law judge” who would bring his impartiality to the nation’s highest court.

“A good judge must be an umpire – a neutral and impartial arbiter who favours no litigant or policy,” he said in the excerpts released by the White House.

Should the confirmation hearing proceed to questioning, as scheduled on Wednesday, Democrats are expected to strongly press Kavanaugh on his position on abortion, and notably the landmark 1973 Roe v Wade case, as well as his endorsement of presidential immunity.

Democrats have been fiercely critical of the Trump administration for not providing sufficient documentation about Kavanaugh’s time in Bush’s White House, where he may have played key roles in decisions such as permitting the torture of detainees.