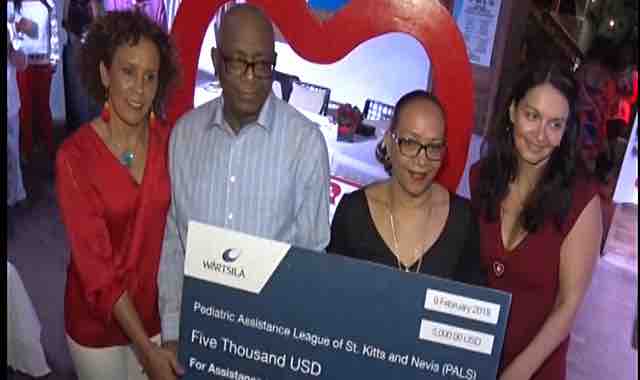 Basseterre, St. Kitts, 12th February, 2018 – A local charity in St. Kitts and Nevis has raised tens of thousands of dollars that will be used to assist children in the federation who are in need of medical attention, primarily overseas.

The funds were raised by the Paediatric Assistance  League of SKN (PALS) during a pre-valentine fundraiser on Saturday, 10th February, 2018, at the Spice Mill on Cockleshell Beach.

The fundraiser was held under the theme, ‘Give with all your heart’, and included activities as a Silent & Oral Auction, a Wheel of Fortune, a Photo Booth, Games, as well as music and dancing.

Several contributions were also made by citizens and residents of St. Kitts and Nevis.

Matthews said the organisation had a very busy 2017 and supported children at the JNF General Hospital and the Alexandra Hospital on Nevis. These children were in need of medical interventions that were available only off-island.

Matthews informed that PALS works along with Social Services to determine who are most eligible to receive funding assistance.

“The children that need our help are those whose families cannot afford the costs for the medical treatment,” Matthews stated.

With the growing demand for assistance from PALS, Matthew reflected upon the ongoing need for support from people and corporate entities who care, so she was quite pleased with the turn-out to the fundraiser.

“It was even more popular than it was last year. Last year we had about 20 persons, and this year, we went up to 260 persons attending the event,” Matthews informed.

It was just in 2017 that PALS celebrated its 25th Anniversary and used the occasion to introduce its annual fundraiser to address the growing demands on the organisation.

Referring to the ongoing need for community and corporate support, Matthews stated, “We need it, because, more and more, there are children suffering from various forms of medical conditions that require overseas care, and remember, we are talking about children whose families cannot afford the costs.”

Matthews said, “Our aim and hope was to raise about $100,000. It might be a bit ambitious, but we believed we could do it once we had the right crowd… because we have to sell and appeal to a crowd that cares. We try to appeal to people whom we know are charitable and empathetic.”