Chavez Described as a True Advocate of the Voiceless

For the Prime Minister of St. Kitts and Nevis, the region has also lost a true advocate of the indigent and the voiceless, a Patriot, who was passionate about his country’s development and laboured tirelessly for the good of the masses in Venezuela.

Douglas said in a press statement on Wednesday afternoon, 6th March, 2013, that it is with a deep sense of sorrow that he extends sincerest condolences on the passing of his esteemed Comrade Hugo, to his dear family, the Government and all the beloved people of Venezuela.

The Kittitian/Nevisian Prime Minister stated, “We know the long battle President Chavez endured and we shall remember his resilience and fortitude through it all.”

As he expressed sympathy on behalf of the Government and people of St Kitts and Nevis Douglas said it is not only the people of the Bolivarian Republic of Venezuela who now mourn the death of President Hugo Chavez, but the region and the world who have lost a great statesman, “and will cherish the boldness with which he championed the causes of the poor.”

“Indeed, the impact of his social programmes has been felt not only in his own country, but has had a tremendous effect throughout Latin America and the Caribbean. The Federation of St. Kitts and Nevis has been a recipient of Hugo’s altruism, beneficence and generosity, evidenced through the Milagro Misiónand the Petrocaribe Initiative,” said Prime Minister Douglas in a message of sympathy to Vice President, His Excellency Nicolás Maduro. 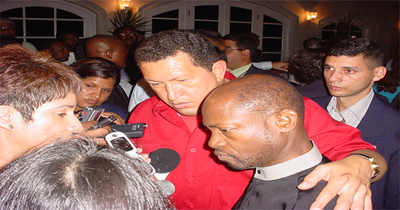 I reiterate our steadfast commitment to our common values and ideals even as we share in your immense loss at this time,” said Prime Minister Douglas to the vice president.

President Chavez died on Tuesday and will be buried this Friday 8th March, 2013. Late Wednesday afternoon Prime Minister Douglas announced that the Cabinet has agreed that a two member delegation, will attend the funeral. This will include himself and his Deputy Prime Minister, Dr. Asim Martin. Chavez visited St. Kitts in 2009 to attend a meeting of the Petro Caribe grouping.

During the course of Wednesday, many Kittitians expressed their views about the style of leadership and the contributions made by the late Latin American leader. Though some questioned his socialist tendencies, others praised him for the work he did in helping small states like St. Kitts and Nevis.