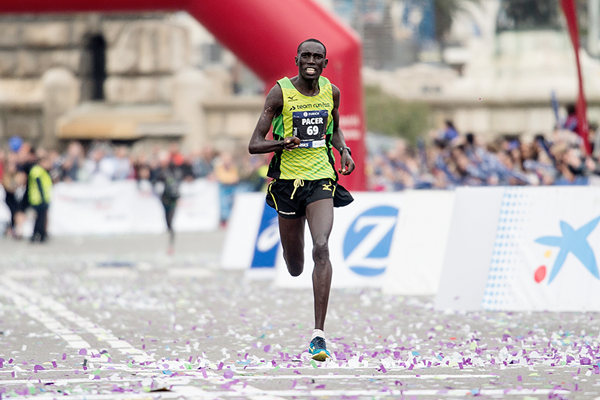 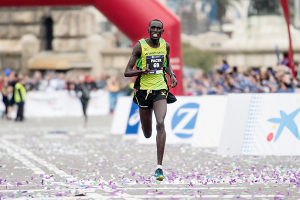 Jonah Chesum returns to defend his title at the Zurich Barcelona Marathon, an IAAF Bronze Label road race, on Sunday (11).

Chesum was a pacesetter last year who went on to win the race in 2:08:57 in his debut over the distance. Later in the season the 29-year-old took fifth in the Gold Coast Marathon clocking 2:10:47.

To help remember his surprise victory last year, Chesum spent part of his earnings from the race to buy a cow for his farm in Iten. “Of course,” he said with a laugh, “I named her ‘Barcelona’. Now she is pregnant and the calf will be named ‘Messi’.”

Chesum represented Kenya in the T46 1500m at the 2012 Paralympic Games, having suffered a hand injury as a child, although he confesses, “I have never felt I have a disadvantage because of that.”

His compatriots Anthony Maritim, who holds a career best of 2:09:11 set last year, and Hillary Kipsambu, with 2:09:28 credentials, will also be chasing a podium spot. They will be joined by Philip Kimutai, who has a 2:06:07 lifetime best set at the 2011 Frankfurt Marathon. More recently, the 34-year-old clocked 2:11:02 at the Ljubljana Marathon in October.

Meanwhile, two-time London Marathon winner Tsegaye Kebede leads a solid Ethiopian trio. Kebede is the fastest entrant thanks to an impressive 2:04:38 clocking set in Chicago five years ago. The 31-year-old has also been successful at the Paris (2008), Chicago (2012) and Fukuoka (2008 and 2009) marathons and has 2008 Olympic and 2009 world bronze medals to his name. He will be making his debut this year after recording 2:08:45 last season in Tokyo.

Kebede’s younger compatriots, Tariku Kinfu and Biro Seboka, should also be in the hunt for the victory on Sunday. While Kinfu, 22, managed a 2:07:48 performance last year in Seville on his second ever marathon attempt, Seboka clocked 2:08:51 in his only outing over the distance in Amsterdam last year.

The course record belongs to Kenya’s Jackson Kipkoech Kotut, who clocked 2:07:30 in 2010. His compatriots Alex Kibarus, Jairo Songok and Daniel Muindi Muteti have been assigned pacing duties through the 30-kilometre point to target that clocking.

Ethiopia’s Worknesh Alemu is the fastest entrant in the women’s race thanks to her 2:30:04 time set in Rabat last year. She’s hoping Barcelona’s flat course will help her dip under the 2:30 barrier for the first time. Italy’s Fatna Maraoui, who boasts a career best of 2:30:50 set in Valencia in 2015, has the same sub-2:30 ambitions.

Kenya will be represented by Lucy Wanjiku Ndungu (2:36:38) and Ruth Chebitok (2:40:05) while the Ethiopian duo of Kebene Chala Urisa and Belaynesh Beyane Tsegaye will be making their debut over the distance.

Great Britain’s Tom Payn will set the rhythm for the lead group in a bid to challenge the course record of 2:25:04 set last year by Helen Bekele, the second fastest women’s performance on Spanish soil.

Over 17,000 entrants will take part in Sunday’s event. Weather forecasters predict quite a windy day but no rain, with temperatures in the 13-15 C range at the start.

DNA leader optimistic about the party’s chances on March 21