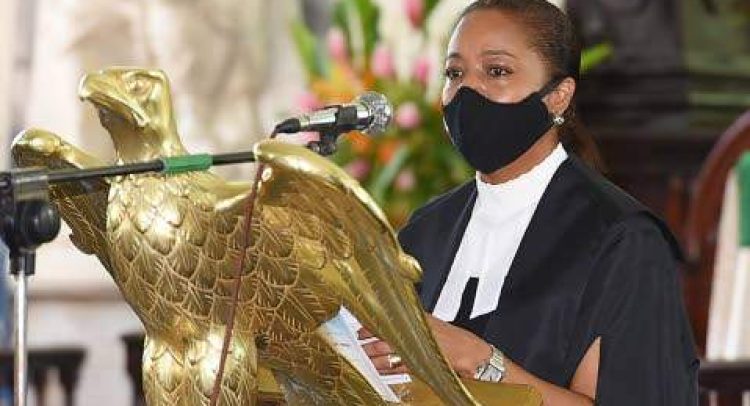 Noting that it could be years before another jury trial is held, given the risks associated with the novel coronavirus pandemic, Chief Justice Bryan Sykes is imploring attorneys to embrace bench trials instead, as a means of keeping the wheels of the justice system turning.

“I understand that there are attorneys who are reluctant to embrace bench trials in the Supreme Court. So we have already had one term, that is last term, where jury trials didn’t occur. We are now in this term, where we are not having jury trials. So it’s roughly nine months going up to the end of December where we will not have jury trials.

“So, if I understand the attorneys properly, they are saying that the constitutional requirement of a fair trial within a reasonable time has no application in these times, because our Privy Council has stated at least 20 years ago, albeit under the old or the previous Bill of Rights, that there is no constitutional right to a jury trial,” Sykes argued.

“There is nothing in the new charter…. in fact the word ‘jury’ isn’t even mentioned. So as it presently stands, as far as I am concerned, there is no right to a jury trial; the right that is guaranteed is a right to a fair trial before a properly constituted and impartial court. And in the event of an adverse verdict, well the system provides the mechanism by which any injustice can be addressed,” he cotinued.

the chief justice was speaking yesterday at the Assize Church Service to mark the beginning of the Michaelmas term of the St James Circuit Court, held at the St James Parish Church in Montego Bay, under the theme: ‘Upholding Justice in Uncertain Times’.

He argued that other players of the justice system have been making themselves available for bench trials so attorenys should, too.

e implored attorneys to re-evaluate their position as he questioned what will happen to matters now before the courts if jury trials cannot resume in the near future. He also pointed out that both victims and defendants will be affected when the trials are delayed, as attorneys await the restart of trials by jury.

“So if I understand my colleagues then, until that time comes, whether it is now, or two years from now, or three years from now, if you believe some experts no jury trials will take place. So what is going to be happening to those persons who are in custody? Those persons who are on bail and cannot take up employment opportunities because each time he goes to his employee he is going to say I can’t come in early Tuesday morning because I have to go to report to the police station? Loss of employment opportunities and essentially disruption of their lives. So I might urge members of the Bar to rethink their position on that,” the chief justice argued further.

“It also has an impact on the victim. We need to have a rebalance in our justice system when we talk about delivering justice in uncertain times. What about the victims who have to relive the experience each time they are told the matter is set down for trial where they have to prepare themselves psychologically and emotionally to come to court and give evidence? Let us spare a thought for those persons as well.”

President of the Cornwall Bar Association Lambert Johnson, who brought greetings after the chief justice, said he has come to the realisation that “the COVID pandemic is too good a crisis to waste”, and has promised to share the chief justice’s recommendation to his colleagues.

“Your arguments were persuasive and I have listened and I will seek to bring your message in the most fulsome way that I can to my brothers and sisters in law, because as I have said, this is too good a crisis to waste. Of course, we would expect that while we do our part the judiciary will also do its part to ensure that what they do is without blame and without blemish. And so, members, I give you this commitment: I shall take the words of the learned chief justice. In fact, I shall embrace them and I shall seek to impart what has been said today [yesterday] because it is very worthy of adoption by the private Bar,” Johnson said.

For her part, Attorney General Marlene Malahoo Forte outlined that a Bill to address the issue of trial by jury was brought to Parliament during the previous Administartion of the Jamaica Labour Party.

“You may not know that a Bill had been taken before the House of Representatives during the last term, which addresses the very matter of trial by jury, and in fact, it was a Bill to amend the Criminal Justice Administration Act. Most of the clauses were passed and in particular, it would have addressed the issues that you raised about trial by jury.

“Suffice it to say that I have taken note of your views and I will bring it back to the executive and the legislative branch to see how we can make progress, and of course we will do so in consultation with the Bar. Whatever it is that we do we have to remember that we are in service of others and there is no view that we can hold so strongly that it becomes institutionalised around us and so thwart the ends of justice,” Malahoo Fore said.

Main photo: Mahaloo Forte… I have taken note of your views and I will bring it back to the executive and the legislative branch to see how we can make progress