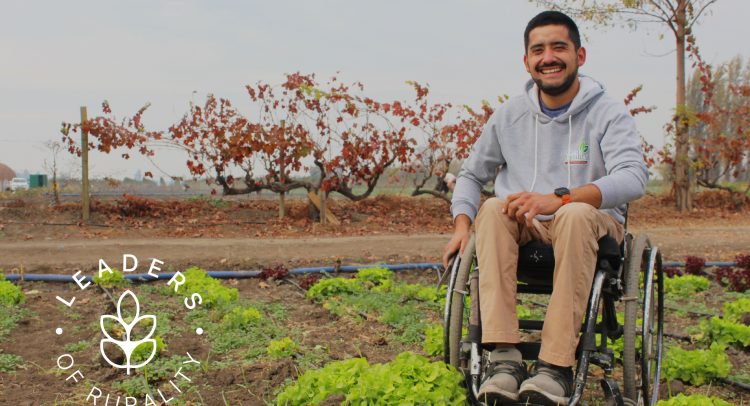 San Jose, 8 June 2021 (IICA). Alfredo Carrasco, an inspirational produce farmer and leader of FarmHability—an inclusive project that promotes sustainable, integrative agriculture—will receive the “Soul of Rurality” award, bestowed on noteworthy Leaders of Rurality in the Americas by the Inter-American Institute for Cooperation on Agriculture (IICA).

“This award pays tribute to those who are playing a unique dual role: guaranteeing food and nutritional security by producing under all circumstances, and protecting the biodiversity of the planet. It will also emphasize their capacity to be positive role models in the rural areas of the region”, stated Manuel Otero, Director General of IICA.

Within the framework of this initiative, IICA strives to ensure the recognition opens spaces for cooperation with state, civil society, and private sector organizations to gain support for their causes.

“These are people whose influence can be seen in the food that we eat—wherever it may end up—and in each plot of agricultural land and in the communities where farmers and their families live. These are men and women who are leaving their mark and are the soul of rurality because they produce, plant, harvest, create, innovate, and unite”, reflected IICA’s Director General upon launching the initiative.

“They embody silent leadership, which is something we should spotlight and recognize. Above all, they are role models, because they transform, overcome adversity, and inspire”, he added.

Alfredo Carrasco: Toward a more sustainable and inclusive agriculture

Quinta de Tilcoco, Chile (IICA). In 2017, Alfredo Carrasco suffered a serious accident that forced him to reinvent himself at a very young age.

Today, the 25-year-old has forged a new path through FarmHability, an inclusive project that promotes a sustainable, integrative agriculture, creating learning opportunities and producing healthy foods for his community.
Alfredo Carrasco inherited his passion for agriculture and nature from his father. From a young age, together they would cultivate vegetables on the family farm. The young Chilean’s world came crashing down four years ago, however, when a mountain bike accident almost left him a paraplegic.

Far from giving up, after two years of rehab, Alfredo found a way to continue working the land and producing food: he designed a greenhouse specifically adapted for his wheelchair and that today helps with rehabilitation and vocational integration for other people with disabilities.

“I’ve worked the field my entire life since my father is a farmer. Even though I’ve been thinking about what to study since I was 17 years old, I’ve always worked the land. When I had my accident, I started looking for a project to be able to return to farming, since it was never in my plans to work in an office. That’s when the idea to do a greenhouse came to me”, tells Carrasco.

“It’s an added bonus to be able to share this place with others and to hold trainings while providing a space for recreation for more people”, he added.

Alfredo lives in the region of O’Higgins, located about 100 kilometers south of Santiago, Chile. His vision to create opportunities for the population with disabilities in the region—about 40,000 people—and to connect them with agriculture has allowed him to expand his horizons.

“These are people who are of working age, but a large majority doesn’t work because of the lack of suitable working conditions. Faced with this reality, and considering the tremendous potential of agriculture in the region, I thought I should do something to combine the two worlds that seemed so far apart. That’s how FarmHability was born”, he said.

The project consists of designing and implementing productive agricultural spaces in which individuals with special needs can develop and acquire the tools to carry out different farm-related activities.

FarmHability owns a 250-square-meter greenhouse outfitted with adapted benches that are accessible to all individuals and a series of aisles that allow for the necessary mobility to access the land, tools, and harvest and packaging areas.

The initiative is supported by the Foundation for Agrarian Innovation (FIA), which reports to Chile’s Ministry of Agriculture.

Alvaro Eyzaguirre, Executive Director of FIA, expressed that for the governing entity, “inclusion is providing specific tools to everyone who makes it possible for food to reach the tables of the residents of Chile and the world. We are thankful that young people with disabilities are brave enough to cross the road to innovation, which is not easy, even knowing that we, as a society, are indebted to them”.

Prior to the pandemic, the project was able to receive 20 people from the region who learned about farming and harvesting foods in a system adapted to their disabilities. Currently, FarmHability is preparing a series of workshops to receive more people from all over of Chile thanks to an improved infrastructure after adapting the halls and bathrooms to this inclusive system.

Alfredo is proud to be helping this segment of the population. “We’re integrating them. We invite them to come and see what we do so that they know it’s possible to farm and do new things to positively impact the lives of other people”.

Currently, the project focuses on growing vegetables. “We use a drip tape system on our open field and we’re working with between 3,200 and 3,500 plants per cycle, which lasts two weeks. In the greenhouse, we have five benches with 600 plants each”, explained Alfredo.

The production system is sustainable, offering enormous water consumption savings, explains its creator: “The hydroponic system constantly recirculates the water and so we’re only losing the water that’s evaporated by the plants. That’s what’s so fantastic about this system: we’re using about 80% less water than we’d use on an open field”.

FarmHability is the result of teamwork between Alfredo, his supportive parents, and the professionals at FIA, who offer advice regarding innovation and collaborate in terms of trade, developing alliances, and ensuring the healthy foods reach the local community.

Alfredo is unstoppable. When he’s not on the field making sure everything’s running smoothly, he’s out delivering hydroponic lettuce in a van he adapted himself. In the afternoon, he takes the time to continue his rehab.

“Agriculture is fundamental. The imbalance we see today is the result of families no longer growing their own food, which led to a disconnection from the earth. It’s very important for people to care about nature again. They can start by growing lettuce at home for self-consumption. I think that’s what we ultimately need to strive for”, he added.

Alfredo also calls for all young people and farmers to organize, seeking help through cooperatives and forming alliances to prove that nothing is impossible. “With a bit of eagerness, effort, and dedication, we can achieve unimaginable things—like a person in a wheelchair farming the earth”, he said.

‘A lot of anxiety’ for Democrats as Biden agenda stalls