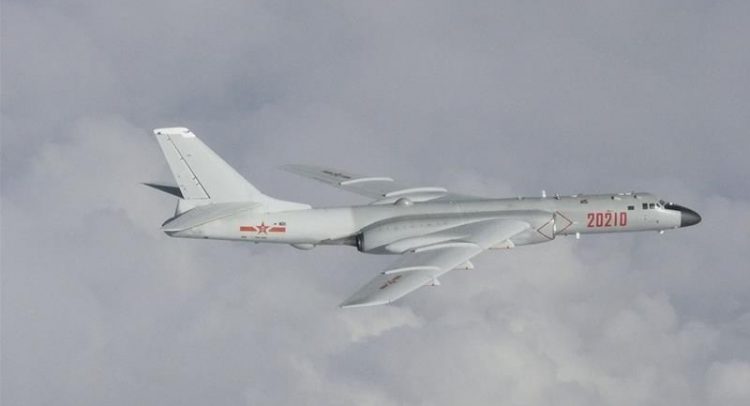 China conducts more exercises near Taiwan as US official visits

Taiwan has said it had to scramble fighter jets to track approaching Chinese aircraft that also crossed the sensitive mid-line of the Taiwan Strait, in an escalation of tensions as a top United States diplomat visited the self-ruled island in a move that angered Beijing.

This came after China’s defence ministry said earlier on Friday it was conducting military exercises near the Taiwan Strait, adding that the drills were in response to the “current situation” and designed to safeguard China’s “national sovereignty”.

Beijing claims Taiwan as its own and has been alarmed by the increasing willingness of the US to defy China’s attempts to isolate the democratically-ruled island. Last week, it held two days of mass air and sea drills.

Taiwan’s defence ministry said 18 Chinese aircraft were involved on Friday, a far larger number than Taiwan has previously announced for such encounters.

“ROCAF scrambled fighters, and deployed air defence missile system to monitor the activities,” it said in an English-language statement on Twitter, referring to Taiwan’s air force.

The ministry showed a map of the flight paths of the Chinese jets and their crossing of the Taiwan Strait mid-line, which combat aircraft from both sides normally avoid passing through.

“There is intense military activity in and around the Taiwan Strait, ratcheting up tensions,” said Al Jazeera’s Rob McBride, reporting from Seoul in South Korea.

“They are a reasonable, necessary action aimed at the current situation in the Taiwan Strait and protecting national sovereignty and territorial integrity,” Ren said, adding that Taiwan was an internal Chinese affair.

When the US health secretary, Alex Azar, visited the island last month, Chinese fighter jets briefly crossed the midline of the Taiwan Strait.

Keith Krach, under secretary of state for economic growth, energy and the environment, arrived on Taiwan on Thursday and is due to attend a dinner with President Tsai Ing-wen on Friday evening. He will also go to a memorial service for Taiwan’s former president Lee Teng-hui on Saturday.

Krach is the most senior official from the US State Department to visit Taiwan in 40 years.

His visit was swiftly condemned by China, which baulks at any recognition of Taiwan and has mounted a decades-long policy designed to marginalise the island on the diplomatic stage, which has intensified since Tsai first won office in 2016. She was returned for a second term in a landslide election in January.

Taiwan’s foreign ministry said Krach, who is accompanied by assistant secretary Robert Destro, would also discuss “how to strengthen bilateral economic cooperation” during his three-day visit.

It described him as the highest-ranking State Department official to visit Taiwan since 1979, when Washington switched diplomatic recognition to Beijing from Taipei.

The US, like most countries, only has official diplomatic ties with China, but it is Taiwan’s main arms supplier and most important international backer.

The top US diplomat for East Asia, meanwhile, said on Thursday China’s recent actions around the world were not those of a responsible global actor, but of a “lawless bully”.

In prepared testimony for a Senate Foreign Relations Committee hearing, David Stilwell said the US was not asking other countries to choose sides, but to stand up against China’s “malign” behaviour and to protect their own sovereignty and economic interests.

At the same time, Stilwell said US competition with China need not lead to conflict, and that the US sought to cooperate with Beijing where interests aligned, for instance on North Korea.

Stilwell said in the past several months there had been “particularly egregious examples of Beijing’s conduct”.

These included violence on its border with India and “aggressive” moves in the South China Sea, around Taiwan, and in waters China disputes with Japan.

Main photo: Joint Staff Office of the Defense Ministry of Japan/Handout via Reuters