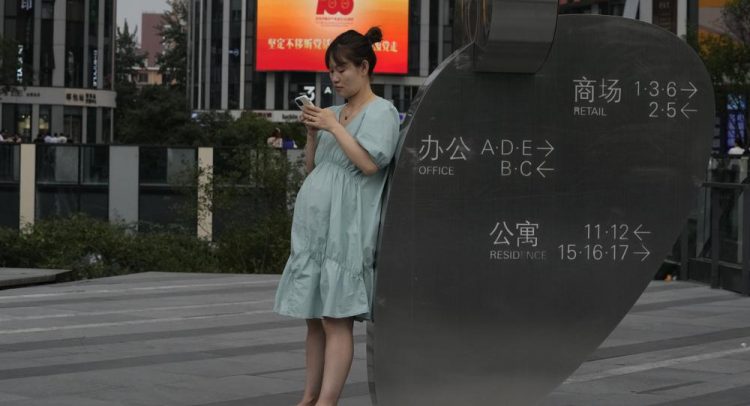 Regulators are reviewing data security “in accordance with the law, with the aim of preventing national security risks,” said a foreign ministry spokesman, Wang Wenbin.

Chinese internet stocks tumbled in New York and Hong Kong after ride-hailing service Didi was ordered to stop signing up new users while it overhauled its handling of customer information. Others have been penalized for anti-monopoly and other violations, prompting concern the ruling Communist Party is trying to rein in companies that pervade Chinese life.

Chinese leaders encourage internet use for business and education but are tightening control as industry giants including Alibaba and Tencent expand into finance, health care and other sensitive areas.

On Wednesday, Didi Global Inc. fell 4.6% in New York, where the company made its stock market debut last month.

A pregnant woman looks at her smartphone near a logo marking the 100th anniversary of the founding of the ruling Communist Party in Beijing on Thursday, July 8, 2021. China’s government tried Thursday to quell investor fears about tighter controls on internet companies that caused share prices to plunge, saying Beijing supports their growth. (AP Photo/Ng Han Guan)

With Suns’ stars rolling, Bucks must be better in NBA Finals