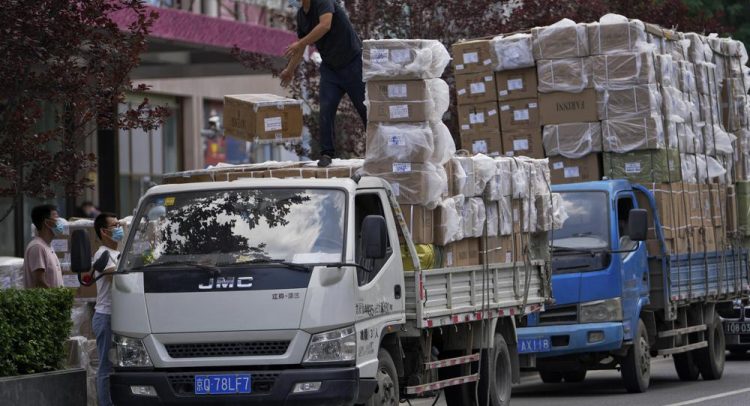 BEIJING (AP) — China’s factory output rebounded in May, adding to a recovery from the latest COVID-induced economic slump after controls that shut down Shanghai and other industrial centers eased.

Industrial production rose 0.7% over a year earlier, recovering from April’s 2.9% contraction, government data showed. Consumer spending edged up compared with April but was lower than a year ago.

The data suggest a “lockdown recovery got underway across most parts of the economy,” said Sheana Yue of Capital Economics in a report.

China’s case numbers in its latest wave of infections are low, but the ruling Communist Party’s “zero-COVID” strategy that aims to isolate every person with the virus shut down most businesses in Shanghai starting in late March and suspended access or imposed other restrictions on other industrial cities. That fueled fears global manufacturing and trade might be disrupted.

Most factories, shops and other businesses in Shanghai, Beijing and other cities have been allowed to reopen but are expected to need weeks or months to return to normal activity.

Economists have cut forecasts of China’s growth this year to as low as 2%, well below the ruling Communist Party’s target of 5.5%. Some expect activity to shrink in the quarter ending in June before a gradual recovery begins.

Consumer spending, depressed by jitters over the economic outlook and possible job losses, rose 0.05% in May compared with the previous month but was off 6.7% from a year ago. Investment in factories, real estate and other fixed assets rose 0.7% compared with April.

“Following all this weak data, we should expect the government to respond with more fiscal stimulus,” said Iris Pang of ING in a report.

Workers load boxes of goods from a truck outside a wholesale clothing mall in Beijing on Tuesday, June 14, 2022. China’s factory output rebounded in May, adding to a recovery from the latest COVID-induced economic slump after controls that shut down Shanghai and other industrial centers eased. (AP Photo/Andy Wong)

Large recycle bins to be placed in communities around St Kitts