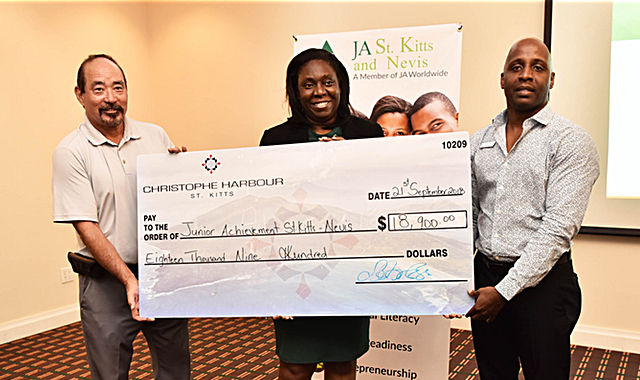 It is expected that over 1,000 students will benefit from funding support for the newly relaunched Junior Achievers St. Kitts-Nevis, when a major contribution from the Christophe Harbour Foundation was presented during a ceremony on 21st September, at the Ocean Terrace Inn.

A cheque in the amount of $18,900 was presented by Foundation representative Clyde Takayama, who reaffirmed the Foundation’s commitment to the Federation’s youth.

“Once again, we are delighted to be given the opportunity to participate in its success, and that of the many youth throughout the Federation,” Takayama said.

He continued, “The Foundation is the Federation’s largest supporter of youth literacy and development. It remains committed to the longterm and committed support of youth programs and initiatives in the Federation.”

The funds will support JA St. Kitts and Nevis after-school programs on both islands.

In 2013, the Christophe Harbour Foundation was one of the founding members of the Junior Achievers program in its initial development following the transfer of coordination under the Chamber of Industry and Commerce.

Discontent brews in India over Modi rule ahead of 2019 elections