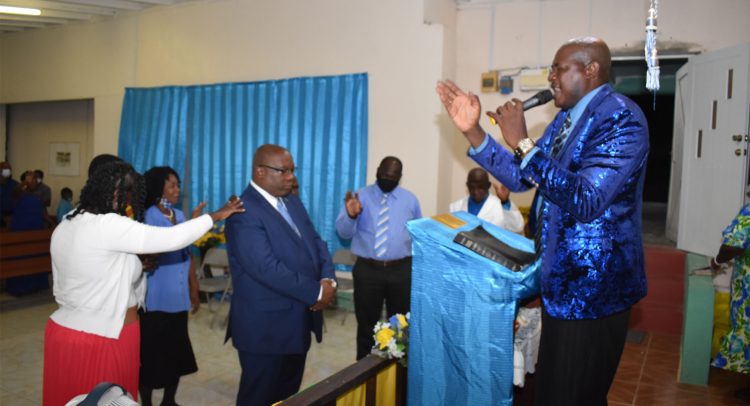 Church leadership to PM Harris: After your political career, step into the pulpit

Prime Minister Dr the Hon Timothy Harris was on Sunday September 20 the special guest speaker during a special worship service held under the theme ‘Goodness of God’ at the Covenant Outreach Ministries in Phillips Estate Yard, in celebration of the church’s 19th anniversary.

“We wish you Pastor all the very best for the next nineteen years and the next nineteen, and to those to who you will pass the baton let them continue to ensure that this church is a welcoming church – it always has been,” Prime Minister Harris told Apostle Wrenville Thomas, who along with his wife Prophetess Tamarah Thomas are the host pastors.

The Honourable Prime Minister, who is also the Area Parliamentary Representative for St. Christopher Seven, recalled years back when the building housing the church used to host sugar workers brought from Guyana and local people used to refer to it as the Guyanese Camp. Someone on behalf of the church approached him for his assistance to have them use the building as a church.

Nineteen years later, Prime Minister Harris told the congregation that looking back he thinks it was one of the best decisions he made to allow the church to take over the structure to put it in excellent use in service to the people of St. Kitts and Nevis, but most importantly in service to God.

“If you come to the church feeling sick, you have to be reminded that the goodness of God keep running after us,” Dr Harris advised the congregation. “It is there for us – God’s favour is unlimited. His grace has no limit and it is just for us to recognise His powerful nature that He is an awesome God and He is all that we need to go through life’s journey.”

That the theme of the special service was ‘Goodness of God’, the Prime Minister’s speech which lasted close to twenty minutes had a profound effect on the leadership of the church.

“When you finish your political career, step into the pulpit – take up your Bible and we will be with you down here,” pleaded Apostle Wrenville Thomas after Prime Minister Harris returned to his seat. “That is a perfect word that God has given unto me to tell you this evening, in Jesus’ mighty name.”

Apostle Thomas who had taken to the pulpit at 6:50 pm told the congregation: “I want to get out of here by seven o’clock, amen! I won’t be long because the Prime Minister himself have spoken and has preached. I just have to listen and say wao, he is a preacher… I want to say thanks be to God.”

Prime Minister Harris was hailed by Apostle Thomas for never having missed any of the church’s anniversary services. He recalled that last year during the anniversary service the congregation had been showered down with blessings.

“It was raining on the outside, and even though we had on a roof it was raining on the inside, and the Prime Minister came and he spoke and he said, look up,” said the Apostle. “He said God had told him to help this church and offered a brand new roof and today we can say to God be the glory our Prime Minister has delivered. Today we are looking at a brand new roof.”

Towards the end of the service, Prime Minister Harris was invited to the front of the pulpit where Apostle Thomas anointed him with oil, and Pastor Linden Providence prayed for him.

“The way how the Prime Minister presents his speech towards the congregation, he presented it even better than some pastors, because the context – the body of his speech is like the body of a perfect sermon,” Pastor Providence told the congregation. “It was like put together in a professional manner even better than how some of us as pastors do put together our sermon. He was right to the word and to the topic – the subject matter that we were using towards our anniversary celebration.”

Main photo: Pastor Linden Providence prays for Prime Minister Dr the Hon Timothy Harris who is seem being supported by other pastors and members of the church leadership.