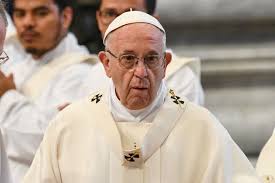 Local church leaders have given cautious responses to a report that Pope Francis told a victim of clerical sex abuse last week that God made him gay and that his sexuality “does not matter”.

The comments, first reported by Spain’s El Pais newspaper, were said to have been made in a private conversation with Juan Carlos Cruz, who reportedly told the pope about abuse he suffered at the hands of a prominent Chilean priest.

The Vatican has reportedly declined to confirm or deny the remarks in keeping with its policy not to comment on the Pope’s private conversations.

However, on Sunday the Independent newspaper in Britain reported that the comments are being seen as “the most explicit acceptance of homosexuality publicly spoken by a head of the Roman Catholic church, which teaches that gay sex is a sin”.

On Monday, when the Jamaica Observer asked the head of the Roman Catholic Church in Jamaica, Archbishop Kenneth Richards, for a reaction to the pope’s reported comment he said: “Some people want to be defined by their orientation, but in church we have people. I don’t relate to them as heterosexual or homosexual. A man is a man and a woman a woman, and we have to respect that.”

Noting that the statement is a report from a private meeting and not from the Holy Father himself, Archbishop Richards said the conversation on homosexuality has become so political that everyone has to be sure not to offend, but the Catholic Church still subscribes to the principles and teachings of the universal church.

“God was sure in creating the complementarity of the sexes for procreation, and sexual activity is for the purpose of procreation… and we must never confuse His meaning and purpose. Yes, there are people who struggle with the human condition of their particular orientation. It is a disorder and a same-sex relationship is disordered activity,” the archbishop said.

Pressed as to what would be his stance if it is confirmed that Pope Francis indeed made the controversial statement, Richards said that he would not speculate. He added, however, “If a person is known to have the maladaptive behaviour of stealing, does that mean he was born a thief?”

Reverend Gary Harriott, general secretary of the Jamaica Council of Churches (JCC), did not offer a position, noting that “the debate is ongoing”.

“There is a need for us to spend some time to try to understand this from the various perspectives. So, I do not know at this time whether JCC would say a person is born this way or not. We have not had any such position for me to be able to indicate any kind of direction or view,” Harriott told the Observer.

Executive Director of J-FLAG Jaevion Nelson said that the statement attributed to the pope is welcomed.

J-FLAG is a human rights and social justice organisation for LGBT Jamaicans.

“I think this is symbolic of the kind of changes that you see in society where members of the clergy at a higher level express the view that all people, regardless of their sexual orientation or gender identity, are created in the image and likeness of God, and I think we are seeing that now where a number of our religious leaders have expressed similar sentiments,” he said.

According to Nelson, the statement does not, however, represent a complete departure from previous ones made by the pope.

“He does have some kind of understanding that LGBT people are deserving of respect and made in the image of God, and so I think it (statement) is welcomed that he would have made such a comment publicly and at such an important time in history.

“I think it will definitely contribute to how people are treated globally. I think the fact that the pope has made such a statement will influence that change in the Catholic Church and might also impact other denominations as well,” he said, adding that this might also have an impact on Jamaica, whether great or small.

Very Reverend Sean Major-Campbell, rural dean of Kingston, told the Observer that he could not readily attribute the statement to the pope, but noted that sexual orientation and gender identity are complex issues on which people continue to get more information in the broad studied areas of gender and sexual diversity.

“In Jamaica and the wider Caribbean, we continue to see the need for more education on this matter of human sexuality, which includes everyone. Increasingly, more individuals and groups are acknowledging that sexual orientation is not something that is necessarily determined as one would make a choice for lunch. This is because sexual orientation is an enduring, emotional, romantic, or sexual attraction for someone of a particular gender. Much of the information about human life and experience today was not available to the ancient world in whose time our various religious texts were born,” he told the Observer in an e-mailed response.

He said that LGBT people have been members of the church and religion for millennia and that they have served at all levels of the church which will continue to know the blessings of their many gifts and talents.

“The statement attributed to the pope interestingly affirms the biblical position that God is impartial. More of us in church should remember that one of the earliest converts to Christianity was a sexual minority — the Ethiopian Eunuch — who was not married; never had a woman; never had children, and would have met with much disdain in our Caribbean church. In accordance with the biblical (New Testament) ethic of impartiality, God’s family would be incomplete without those deemed queer,” Major-Campbell said.