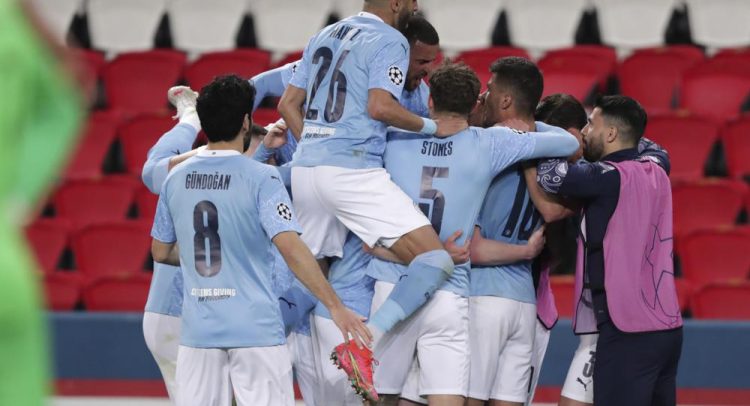 City emerges from hole to close in on Champions League final

Neymar was delving deep into his box of tricks, the marauding Kylian Mbappe had that glint in his eye, and Manchester City’s players had been struck by a rare case of timidity.

Thirty minutes into the Champions League semifinal and the scenario Pep Guardiola had feared before the match was unfolding right before his eyes against Paris Saint-Germain at Parc des Princes.

“Everyone was playing safe, not having the personality to go and play,” Guardiola said. “That is why we were so shy.”

Indeed, with City trailing 1-0 and on the ropes early in the first leg, the one instruction Guardiola had particularly wanted to get through to his players — “Be ourselves” — was being ignored.

The fullbacks, so key to City’s fluid system, were sitting back, unusually. The passes in midfield were safe. There was little ambition in an attack again featuring no recognized striker.

That City managed to turn the situation around on the biggest European night of most of its players’ careers was why Guardiola looked so proud after his team’s 2-1 win on Wednesday.

A Champions League final has never been so close for the blue half of Manchester, having looked so far away at one stage.

Ahead of Tuesday’s second leg at Etihad Stadium, Guardiola again doesn’t want his players to lose sight of one overarching principle.

“It‘s simple,” he said. “If we play shy and not who we are, everything can happen and PSG have the quality to turn it on.

“But if we play the way we played the second half, who we are, maybe we will have the chance to reach the final.”

Despite its dominant second-half display, when the team played with more courage and purpose and the fullbacks finally got themselves in attacking positions, City still relied on two pieces of fortune for the goals. Kevin De Bruyne’s cross evaded everyone and found the corner of the net, while Riyad Mahrez surely could not have purposely picked a small hole in PSG’s defensive wall for his winning goal from a free kick.

A third goal for City after PSG midfielder Idrissa Gueye was sent off for a foul on Ilkay Gundogan would have left the French team with perhaps too big a mountain to climb. As it is, City will have to be wary of an opponent that scored four goals at Barcelona’s Camp Nou and three at Bayern Munich’s Allianz Arena previously in the knockout stage.

“We know there are going to be moments where we suffer,” De Bruyne said. “The quality at this stage, we know how good they are. You have to run hard for the team. (But) we also have quality.”

Other factors give City a bigger edge in light of the six-day turnaround to the second leg, too. While Guardiola can afford to play a virtual reserve team against Crystal Palace in the Premier League on Saturday, with the title close to being wrapped up, PSG coach Mauricio Pochettino is likely to field a strong lineup against Lens on the same day because the French league’s title race is so finely poised.

PSG is in second place, a point behind Lille and a point ahead of Monaco, with four games left and has already lost to Lens this season. City, on the contrary, holds a 10-point lead over Manchester United.

Then there’s the backbone City has developed under Guardiola, especially now that the defense is more solid following the early season arrival of center back Ruben Dias. The team fell behind to Borussia Dortmund, Aston Villa and now PSG in the last two weeks, and went on to win each time.

City has lost this month to Leeds in the league and Chelsea in the FA Cup semifinals, but Guardiola rotated heavily for both games and the team’s rhythm was affected. A fresh and full-strength City lineup is another proposition entirely.

Still, City’s players are not getting ahead of themselves. The celebrations were reserved at the final whistle and Guardiola said there was “no cheering” in the locker room, with the job only half-done and that threat of Neymar and Mbappe so clear.

“Just calm,” Guardiola said, “because we know anything can happen in the second leg.”

Official address on the occasion of World Day for Safety and Health at work by Hon. Wendy Phipps, Minister of Labour et al