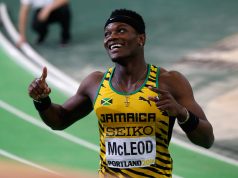 Claude Bryan, agent for Jamaican sprint hurdles superstar Omar McLeod, has hit back at Jamaican track and field authorities in the ongoing war of words over the athlete’s non-participation in this weekend’s IAAF World Indoor Championships in Birmingham, England.

In an email that was copied to the Jamaica Observer yesterday, as well as to several major international media houses, Bryan, the president of OnTrack Management, stated: “I am not here to give catchphrases and media bites that grab the public attention, rather I am here to state the facts — and they can all be authenticated by emails.”

News broke late Friday that McLeod, who was seeking to defend his World Indoor title in the 60m hurdles, would not be part of the Jamaican team as he had not been able to secure, in time, documents from the Jamaica Athletics Administrative Association (JAAA) to be granted entry visa into the United Kingdom.

Additionally, two female sprint hurdlers — both US college students — who were named to the team also withdrew. It is understood that the JAAA would not have been able to name replacements for all three, given that the deadline for entries had passed.

Dr Warren Blake, president of the JAAA, had told the Observer on Friday the federation had invited overseas-based athletes to come to Jamaica where their travel arrangements could be sorted out, as they prepared to travel to the United Kingdom.

Bryan, who represents several Jamaican athletes and others from countries such as The Bahamas and the USA, said the JAAA had been tardy in responding to their requests dating back to November last year.

His release yesterday said the JAAA was “put on notice in November of the need to be proactive on visas for the World Indoor Championships.

It added: “I reminded them throughout January and then in February (5th- 13th and 15th). I communicated to them asking about the plans the JAAA had in place for visas and indicating the need for a letter of invitation.

“The last communication to them on the 15th indicated that we needed the letter by the 16th for a visa appointment at the British Consulate early on the next week.

The release stated that the JAAA, which is alleged to have responded via e-mail between February 13-15, said: “Received and noted. I will endeavour for you to get this letter today, thanks.”

It charged that there was “no further communication from the JAAA about this issue, despite the urgency indicated”.

The OnTrack Management boss said Dr Blake’s assertion that arrangements for athletes were made in Jamaica to get paperwork sorted out did not include that they only got this information on Friday, November 23rd.

“This is, in fact, short-changing the public of all the circumstances surrounding what really transpired. It’s akin to him saying Omar McLeod has withdrawn himself from the team without indicating the circumstances; it leaves the public to conclude that Mr McLeod was the bad guy when in fact he was left with no choice.”

McLeod has a season’s best 7.46 seconds in the event.

Here's Why 'Black Panther' Can't Be Stopped at the Box Office