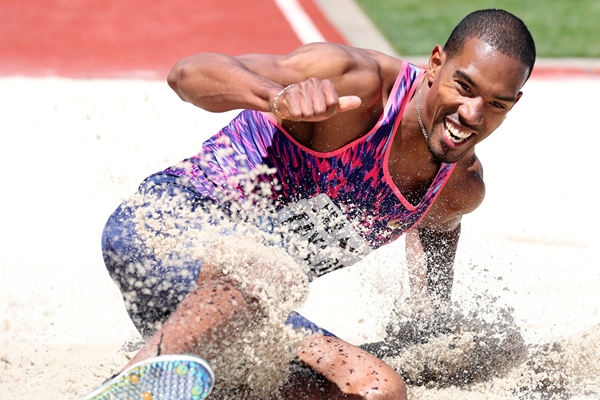 Christian Taylor and Will Claye, who have combined to claim seven major gold medals, will headline the men’s triple jump at the 44th Prefontaine Classic on 25-26 May, the third stop of the 2018 IAAF Diamond League.

They would be headliners anywhere, and the renewal of their 43-meet rivalry can make some fans overlook the fact that the loaded Pre Classic field includes a full sweep of medallists from last year’s World Championships and the Rio Olympics as well.

In the triple jump, Taylor vs. Claye is a matchup never to be missed – especially at Hayward Field, where the two have found uncanny ways to top each other at the last two editions of this meeting. In those combined 12 rounds of competition, they achieved seven lead changes and eight world-leading marks.

Taylor, 27, is one of the Diamond League’s main attractions with six series trophies to his name –only pole vaulter Renaud Lavillenie, with seven, has more. In the triple jump, he has few peers – and those are legends. Only Viktor Saneyev can top Taylor’s two Olympic gold medals, and no one can match his three World Championships title.

Taylor is history’s second-longest triple jumper at 18.21m –-the world record of 18.29m by Edwards was set in 1995 when Taylor was just 5. His hard-fought three Pre Classic wins –-all over former University of Florida teammate Claye in thrilling competitions-– matches Hall of Famer Willie Banks for the most in Pre Classic history in this event.

Will Claye, 26, won the world indoor title last month, a second global indoor title after his victory in 2012. He was only 20 then and later in the London Olympics claimed triple jump silver and long jump bronze that made him the first man since 1936 to win Olympic medals in both horizontal jumps.

Claye has battled Taylor since they were college freshmen in 2009, originally at different schools until Claye transferred from Oklahoma to Florida as the horizontal jumps world took a Gator flavoring in 2011. They finished 1-2 in the World Championships in Daegu that year, and every Olympics and outdoor Worlds since has seen both on the podium except 2013 when Taylor was only fourth. The head-to-head rivalry had always been tied or in Claye’s favor until last year at the World Championships. Taylor now owns the slimmest of leads, 22-21.

Claye has clearly been a major part of the two best Pre Classic triple jumps. In 2016, he took the lead in round 6 at 17.56m only to be overtaken by Taylor’s 17.76m, breaking the Hayward Field record set by Claye at the 2014 Pre Classic.

Last year, both went over 59 feet (17.98m) with Claye’s wind-aided 18.05m just short of Taylor’s 18.11m, the best ever achieved on U.S. soil. Claye’s mark was merely the farthest ever achieved without winning.

Portugal’s Nelson Évora can match Taylor as a world and Olympic champion, back in 2007 and 2008. More recently, he’s claimed world bronze in London last summer and Birmingham last in March.

China’s Bin Dong, 29, won the world indoor title in Portland in 2016. He saved his best performance for Rio, where he claimed Olympic bronze at 17.58m, just a centimeter shy of Li Yanxi’s Asian record.

Max Hess of Germany is the youngest in the field at 21. He scored his best global medal with a silver at the 2016 World Indoor Championships and also took the European title outdoors that same year.

Google should not be in business of war, say employees

Is Wingfield body that of missing Newton Ground man?