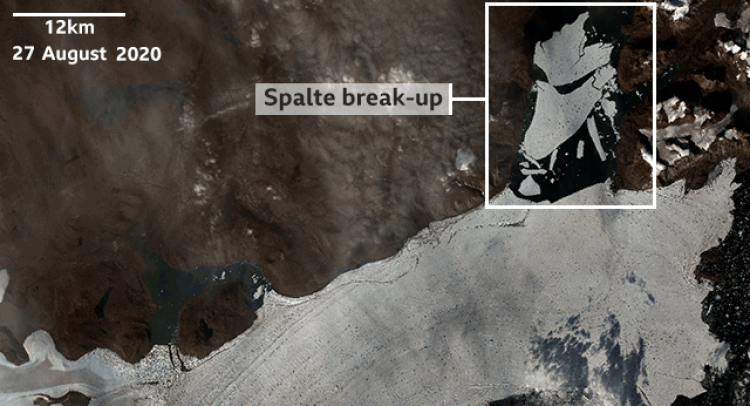 A big chunk of ice has broken away from the Arctic’s largest remaining ice shelf – 79N, or Nioghalvfjerdsfjorden – in north-east Greenland.

The ejected section covers about 110 square km; satellite imagery shows it to have shattered into many small pieces.

The loss is further evidence say scientists of the rapid climate changes taking place in Greenland.

“The atmosphere in this region has warmed by about 3C since 1980,” said Dr Jenny Turton.

“And in 2019 and 2020, it saw record summer temperatures,” the polar researcher at Friedrich-Alexander University in Germany told BBC News.

Nioghalvfjerdsfjorden is roughly 80km long by 20km wide and is the floating front end of the Northeast Greenland Ice Stream – where it flows off the land into the ocean to become buoyant.

At its leading edge, the 79N glacier splits in two, with a minor offshoot turning directly north. It’s this offshoot, or tributary, called Spalte Glacier, that has now disintegrated.

The ice feature was already heavily fractured in 2019; this summer’s warmth has been its final undoing. Spalte Glacier has become a flotilla of icebergs.

Look closely at the satellite pictures and the higher air temperatures recorded in the region are obvious from the large number of melt ponds that sit on top of the shelf ice.

The presence of such liquid water is often problematic for ice platforms. If it fills crevasses, it can help to open them up. The water will push down on the fissures, driving them through to the base of the shelf in a process known as hydrofracturing. This will weaken an ice shelf.

Oceanographers have also documented warmer sea temperatures which mean the shelf ice is almost certainly being melted from beneath as well.

“79N became ‘the largest remaining Arctic ice shelf’ only fairly recently, after the Petermann Glacier in northwest Greenland lost a lot of area in 2010 and 2012,” explained Prof Jason Box from the Geological Survey of Denmark and Greenland (GEUS).

“What makes 79N so important is the way it’s attached to the interior ice sheet, and that means that one day – if the climate warms as we expect – this region will probably become one of the major centres of action for the deglaciation of Greenland.”

The Northeast Greenland Ice Stream drains about 15% of the interior ice sheet. The stream funnels its ice either down N79 or the glacial member just to the south, Zachariae Isstrom. Zachariae has already lost most of its floating ice shelf area.

Prof Box said N79 could resist longer because it was penned in right at its forward end by some islands. This lends a degree of stability. But, he added, the shelf continues to thin, albeit mostly further back along the trunk.

“This will likely lead to N79 disintegrating from the middle, which is kind of unique. I guess, though, that won’t happen for another 10 or 20 years. Who knows?” he told BBC News.

July witnessed another large ice shelf structure in the Arctic lose significant area. This was Milne Ice Shelf on the northern margin of Canada’s Ellesmere Island.

Eighty sq km broke free from Milne, leaving a still secure segment just 106 sq km in size. Milne was the largest intact remnant from a wider shelf feature that covered 8,600 sq km at the start of the 20th Century.

The fast pace of melting in Greenland was underlined in a study last month that analysed data from the US-German Grace-FO satellites. These spacecraft are able to track changes in ice mass by sensing shifts in the pull of local gravity. They essentially weigh the ice sheet.

The Grace mission found 2019 to have been a record-breaking year, with the ice sheet shedding some 530 billion tonnes. That’s enough meltwater running off the land into the ocean to raise global sea-levels by 1.5mm.