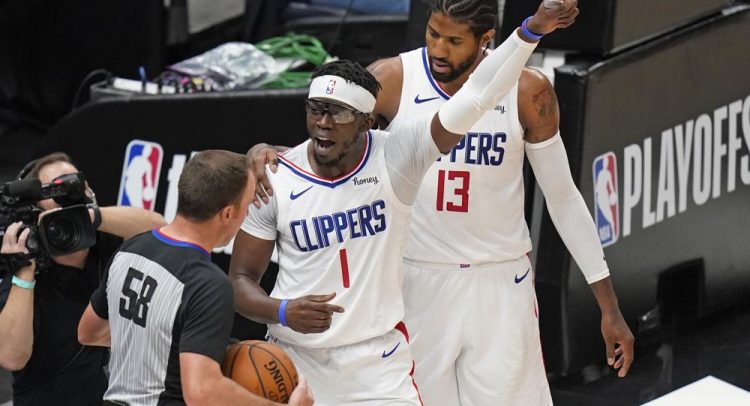 With Kawhi Leonard sidelined with a knee injury, George responded with one of the best postseason performances of his NBA career with 37 points, 16 rebounds, and five assists to lead the Clippers to a 119-111 victory over the Utah Jazz in Game 5 of their Western Conference semifinals series Wednesday night.

George became the first player in franchise history to post at least 35 points, 15 rebounds, and five assists in a playoff game.

“It was no secret. I knew I had to be big tonight and gotta be big going forward,” George said.

Marcus Morris scored 25 points and Reggie Jackson added 22 for the Clippers. Los Angeles won its third straight game to push the top-seeded Jazz to the brink of elimination. The Clippers shot 51% from the field in Leonard’s absence after he played a critical role in helping them win Games 3 and 4 in the series.

“Our season is alive because of his shouldering of all the work he’s done,” George said. “We got to hold it together and continue to keep this boat afloat until he returns.”

“This series is not over,” Mitchell said. “We got a lot of life left to give, a lot of juice to give and we just got to go out there and play with a level of desperation that we’d never played with before, otherwise we’ll be home.”

The Jazz trailed the entire fourth quarter after making just six baskets in the third. Utah cut the deficit to 100-97 when Mitchell converted a three-point play with 5:46 left. Jackson answered with back-to-back baskets to squelch a Jazz comeback. Utah could get no closer after that.

The Clippers played their first postseason game without Leonard after he suffered a knee injury in Game 4. Mike Conley missed his fifth straight game for the Jazz while rehabbing a strained hamstring.

Los Angeles seized an early 10-3 lead after Terence Mann took a steal in for a layup to cap a string of four baskets on four straight possessions. Los Angeles could not hold the advantage for long after Utah started hitting from the perimeter.

The Jazz made a franchise-record 10 3-pointers and shot 13 of 18 from the field overall in the first quarter. Bogdanovic led the way, going 6 of 7 from outside, tying an NBA postseason record for most 3-pointers made in a quarter. He scored the last four outside baskets on four straight possessions to put Utah up 32-26.

Utah kept up the barrage in the second quarter and went 17 of 30 from 3-point range before halftime. The Jazz built up a 10-point lead during the quarter, going up 56-46 when Gobert tipped in a layup to punctuate a 13-2 run.

Los Angeles weathered the storm and surged back early in the third quarter. The Clippers opened the second half on a 23-9 run, capped by back-to-back 3s from George and Mann and took an 83-74 lead midway through the quarter.

“Every guy that played tonight contributed and that’s the team we have,” Clippers coach Tyronn Lue said. “Mentally tough. Mentally strong. We just keep fighting to the end.”

Clippers: Mann made his first career start in a playoff game in place of the injured Leonard. He finished with 13 points and two steals. … Los Angeles scored 17 points off 11 Utah turnovers in the first half. … George posted his third consecutive 30-point game. He’s scored at least 20 points in all five games against the Jazz.

Jazz: Bogdanovic became the fourth player to make at least six 3-pointers in a quarter during the 2020-21 NBA Playoffs. … Utah had more turnovers (6) than missed baskets (5) in the first quarter. … The Jazz missed 17 straight shots from the perimeter before Mitchell ended the drought with a 3-pointer with 4:05 remaining. Utah went 0 of 10 from 3-point range in the third quarter alone.

Mitchell has had to adjust his game during the series as he continues to struggle with the ankle he injured in mid-April. He lacked his usual explosiveness on several offensive possessions and occasionally grimaced after scoring baskets in the fourth quarter.

It left Mitchell feeling frustrated with his limitations following the game.

“It’s something I have to deal with,” Mitchell said. “It (expletive) sucks. I ain’t got nothing else to say. It’s tough when you’re trying things you normally do and you see spots you can get to, but you can’t. So, you gotta find a way to make it happen. It’s tough, but I gotta find a way otherwise I’m gonna be home.”

Mann capped his first postseason start with a driving dunk and a free throw with 2:39 remaining after the Jazz cut the Clippers lead to four on a Bogdanovic 3-pointer moments earlier. The second-year forward drew a foul on Gobert and his scoring play kept the Jazz at arm’s length over the final two minutes.

“I was just tired of settling on him,” Mann said. “I wanted to see if I could get him moving.”