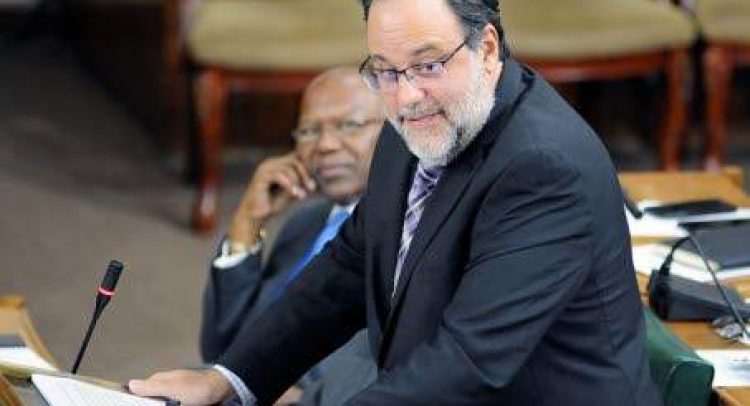 CMU VP says he took instructions for payments from Pinnock

PROFESSOR Fritz Pinnock’s stewardship of the Caribbean Maritime University (CMU) yesterday again came under sharp scrutiny at a meeting of the Public Accounts Committee (PAC) at Gordon House, as officers of the institution say they were following direct instructions from the president’s office for the payout of contracted services.

The committee was continuing its examination of findings of the December 2019 auditor general’s special audit report on governance, procurement and contracts management at the CMU and the Ministry of Education, Youth and Information.

Associate vice-president of the Faculty of Advanced Skills and Professional Development at the university Dr Kornel Brown told the PAC that he followed instructions from Professor Pinnock that payments be made to Optimum Customer Service and Consultancy for the provision of lunches — through 15 suppliers — and other services to some 600 participants in the Career Advancement Programme – Youth Employment Solution (CAPYES) across the island.

Brown, who oversees one of four versions of the CAPYES, which is administered by the CMU through its sentinel sites across several parishes, said there were a mix of arrangements for the provision of lunch to the participants, including the payment of subsidies instead of providing meals.

According to the report, the CMU paid $46.7 million to 15 lunch suppliers over the period January to December 2018 under CAPYES and the Technology Advancement Programme (TAP), without a competitive tender process, and was unable to indicate the basis on which the providers were selected.

Furthermore, the auditor general said, the CMU did not provide evidence that it carried out due diligence, such as adherence to sanitary standards prior to engaging. “Notwithstanding, we noted that three lunch suppliers also received payments totalling $11.5 million for building services. CMU’s records did not indicate whether the number of lunches ordered were in fact delivered,” the report stated.

According to Dr Brown, he took direct orders from the president’s office, guided by an overarching memorandum from Professor Pinnock. He also said when he took up office at the CMU in October 2017, it was as a result of the CAPYES being a “very problematic situation”.

He told the PAC that he was instructed, via a memorandum dated January 5, 2018, to sign draft memoranda for payment to each of the sub-contractors that were engaged by Optimum, as providers of meals for various training locations.

“It is consistent with the level of support agreed with Optimum specific to the CAPYES intervention that they, a partner entity, agreed to deliver and coordinate. On the basis that the overall CAPYES intervention is situated in the Faculty of Advanced Skills and Professional Studies, kindly sign/endorse each memorandum and submit to the office of the treasury,” he read, agreeing with the observation of Manchester Central Member of Parliament Peter Bunting that he had signed the draft documents without knowledge of whether value had been obtained for money, or if procurement guidelines had been followed.

“Given that you’re the one in front of us here, do you understand that you have the liability, the obligation, to have ensured that these payments were in order and that you are in fact in violation of your responsibility as an officer at CMU to just sign them off [because] the president says; you’re at risk of being complicit in this whole exercise,” Bunting stated.

“I acted on instructions, and the documents were submitted,” Dr Brown responded, arguing that at the time he had no basis on which to question the arrangement as there was “an obvious relationship” between the CMU and the consultancy, “that would have invited no cause for concern”.

Deputy head of the CMU Professor Ibrahim Ajaguna told the PAC that he was not aware of the memorandum, which was only brought to his attention by Dr Brown a few weeks ago.

PAC Chairman Mark Golding pointed out that the document on the issue which had been submitted to the committee, only speaks to a memorandum between the CMU and Optimum, which sets out a general business partnership framework regarding training. “There is no reference in that to lunches,” he remarked.

Bunting said that the document before the PAC did not speak specifically to CAPYES, but rather the facilitation of a consultancy to deliver training which was then certified by the CMU, for which the university received 30 per cent of the training cost of $16,250 per client.

St Ann South East MP Lisa Hanna noted also that the memorandum between CMU and Optimum was dated March 2018, three months after Dr Brown said he was issued with a memo instructing him to endorse the payments.

Hanna described the situation as a period of “wanton liberty”, stating that she did not necessarily excuse rubber-stamping procedures when there were clear questions surrounding those practices.

“But I also realise that, in circumstances that appear beyond your control, you acquiesce, or you fall in line,” she noted. “I remember Dr Pinnock and he was larger than life [but is] everything that he says to you you’re mesmerised by? And when you start to probe you realise even some of the public statements that he made, to say he didn’t know this was happening…you’re now seeing the documentation in black and white, with his signature affixed to direct instructions and a very clear habit to be instructing unilaterally from his office.”

The committee is proposing to have Optimum consultancy appear on May 16 to answer questions about the nature of its arrangements with the CMU.